Meet Russia’s Odintsovo Karakurt-Class Corvette (A Killer or a Dud?) 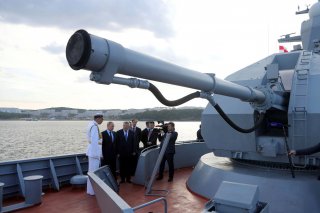 The Russian Navy’s Odintsovo Karakurt-class corvette of project 22800 is preparing for its sea trails. Last month the crew completed its training at the Navy center in St. Petersburg, while the vessel’s running trails began last month. It recently completed its dock trails to check the operations of some life support, radio navigation and communication systems as well as the main powerplant.

The project 22800 corvettes are powered by twin M-507D-1 diesel engines, which provide a top speed of 35knots and an economical speed of 12knots. The small vessel has a range of 2,500 nautical miles and an endurance of 12 days. These vessels are noted for their increased seaworthiness, high maneuverability and low radar signature of the superstructure and hull—which make them ideal for conducting attacks on coastal defenses. The ships also carry an Orlan-10 unmanned aerial vehicle (UAV), which can provide aid in targeting enemy positions. The corvettes were designed to accommodate modernization efforts to allow their role in the Russian Navy to evolve as required.

The Odintsovo is the third corvette of project 22800 and was laid down by Pella Shipyard in July 2016 and floated in May 2018. In April, the installation of its Pantsir-M anti-missile launcher was completed and the weapon systems began testing. The latest Pantsir-M can destroy helicopter gunships, assault jets, cruise and anti-ship missiles—and it target aircraft within a radius of 20km.

NavalRegonition reported that while all project 22800 corvettes are to be armed with the Pantsir-M there were doubts as to whether such a small warship could carry the sophisticated weapon platform. The Pantsir-M provides two tiers of air defense to protect a vessel from any airstrike. It utilizes eight anti-aircraft launchers and two six-barrel 30mm automatic guns, and has been used on a numerous Russian warships to provide protection from a variety of threats including those aforementioned missiles, airplanes and helicopters. The launchers can target aircraft at the 20km range, and targets that breakthrough come under fire of the 30mm guns that can destroy incoming treats in a range of four kilometers. The rate of fire of the guns is 10,000rpm. The weapon system can also be used to repeal an attack of small warships and to strike against coastal targets.

The corvette’s main armament is the Kalibr-NK cruise missiles, which are fired from an eight-tube UKSK vertical launching system (VLS). It is a land-attack cruise missile that is carried by Russia’s surface fleet, and has a range of 1,500 to 2,500km. The vessel will also armed with an AK-176MA 76.2mm automatic gun located on the forward bow deck. This upgraded variant of the AK-176 naval gun has a range of 15km and a rate of fire of 150rpm.The Odintsovo is scheduled to be handed over to the Russian Navy’s Baltic Fleet by the end of this year.

Admiral Valentin Selivanov, a military analyst who previously served as the chief of staff of the Russian Navy, told NavalRegonition that Odintsovo and the other project 22800 corvettes will be hard-hitting vessels that get in and get out quickly, “They usually operate from an ambush. They sail out from a bay, fire Kalibr missiles and hide. Pantsir can defend all Karakurt-class ships in such a rapid attack. It can also protect naval bases and will be included into a single fire force of the area.”