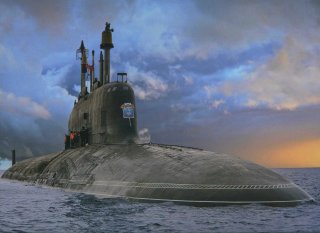 Russia is planning to launch its hypersonic Zircon anti-ship missile from underwater at some point this year, though the launch date seems to have been pushed back at least once.

The Russian state-owned Tass news agency quoted a Russian defense industry source as saying that “As part of the continued state trials of the Tsirkon [or Zircon] shipborne missile system, the hypersonic missile’s firings are planned from the submerged position from the submarine Severodvinsk.”

The improved Yasen-class is “on par with older U.S. Seawolf-class SSNs, built by the U.S. Navy from 1989 to 2005, although the underwater top speed of the Russian subs is reportedly much lower than that of U.S. boats.” It is thought to be not as capable as America’s Virginia-class and is also somewhat slower.

Both the Yasen and improved Yasen-class have eight vertical launch tubes for launching either Kalibur anti-ship/anti-land missiles or P-880 Onyx anti-ship missiles.

The Zircon hypersonic missile is alleged to be a variant of Russia’s P-880 Onyx. At Mach 2.9, the Onyx is fast, but nowhere near as fast as the Zircon, which is propelled to hypersonic speeds—in excess of Mach 5. The Zircon has a two-stage propellant system that uses a solid-fuel propellant to bring it up to speed, then is powered by a scramjet combustion engine.

Launching submarine-based hypersonic missiles is a potent ability. Submarines can stay underwater for weeks or months, undetected and protected. Though the Zircon is thought to be armed with conventional explosives, it hardly matters.

Traveling in the Mach 5+ range generates so much kinetic energy that even a concrete-filled warhead would create a massive explosion if it hit the ground—or a massive hole in an aircraft carrier.

Moreover, hypersonic missiles are incredibly hard to defend against. As I previously wrote, “evasive maneuvers are difficult against hypersonic weapons because the weapons themselves are highly maneuverable. Using kinetic interceptors to shoot down a hypersonic missile would be like shooting a bullet with a bullet”—a complex operation.

“Further complicating the problem is the fact that most missile defense systems are generally optimized to counter specific, existing threats and hypersonics traveling close to two miles a second are just not on their menu.”

Two advanced Russian systems are coming together in a potent new way—advanced nuclear submarine design coupled with advanced under-water-launched hypersonic cruise missiles. Could this be the great underwater equalizer?