Meet Sig Sauer: Everything You Want to Know About this Gun Manufacturer 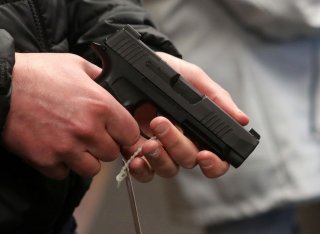 Shooters may know Sig Sauer as well as its famous moniker “Never Settle,” but less well known is the complex history of the company. It is a mix of old and new, its roots are Swiss and German yet today is headquartered in the United States in New Hampshire. During its history it produced weapons for the Nazis and later for the infamous East German Volkspolizei (People’s Police) and yet in recent years has provided the handguns for more than one-third of U.S. police forces.

It is a company that has been described as “born in Europe, perfected in America.” In fact, the American Sig Saucer Inc. is now operationally separate from the Swiss-German company SIG Sauer GmbH, which produces packaging but not firearms.

The origins of the modern firearms maker go back to 1751 when J.P. Sauer and Sohn GmBH (Sauer & Sohn) was founded in Suhl, Thuringia (in modern central Germany). It was the first and oldest German firearms manufacturer and produced mostly high-quality civilian hunting weapons—but during World War II the company also produced the Karabiner 98K rifle for the German Army and later was instrumental in the development of the StG44, the world’s first assault rifle.

While a version of that company continued to operate in East Germany as VEB Ernst Thälmann and continued production of the StG44 for the Volkspolizei, Rolf-Dietrich Sauer moved to West Germany and established a new version of the company. It mostly produced hunting rifles and later pistols and was among the first post-World War II German arms manufacturers to build a large export market.

The other half of the story involves Schweizerische Industrie-Gesellschaft (Swiss Industrial Company), which had been founded in 1864 as the Swiss Wagon Factory. Its first foray into firearms came in 1864 when it received a contract to produce 30,000 muzzle loading Prelaz-Burnand rifles for the Swiss Army.

Switzerland had remained neutral throughout both World Wars but SIG continued to produce weapons for its military and this included the revolutionary P210, the precursor to the popular P220 handgun. However, during the 1970s Swiss law prevented wider export of the P-series handguns, so in 1976 the Swiss firm partnered with the German J.P Sauer and Sohn.

Less than a decade after the Swiss-German partnership, the company expanded to the United States and opened SIGARMS in Tyson’s Corner, Virginia—where it imported the P220 and P230 pistols. The company moved to a larger location in Herndon, Virginia in 1987, the same year it introduced the P225 in 9mm. That was followed by the P226 and P228.

In 1990, the company moved to New Hampshire—and opened a new corporate headquarters and production facility in 2014 in the city of Newington, where it produced nearly a half-a-million firearms in 2015. In just three decades, the company has become the fourth-largest gun maker in the United States by volume. As of 2007 the company also officially changed its name to Sig Sauer, highlighting its European roots that were perfected in America and to this day it is a company that truly never settles.