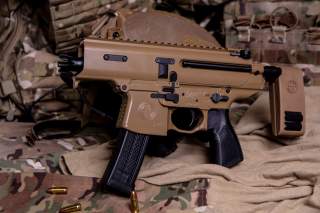 A new weapon designed by Sig Sauer is leading what could be a return to the submachine gun platform.

The new MCX Copperhead submachine gun was likely designed for use by U.S. Army VIP protection teams looking for a concealable, high firepower weapon. A version of the Copperhead is now available on the civilian market in pistol form.

In mid-2018, the U.S. Army put firearm manufacturers on notice that it was looking for its first new submachine gun since World War II. The service issued a request for information for a Sub Compact Weapon (SCW), a select-fire weapon chambered in 9x19-millimeter and featuring a full-length MIL-STD 1913 Picatinny rail for attaching lasers and optics. The weapon would also be the first official “Big Army” weapon to be equipped with a suppressor.

Ten companies responded to the Army’s request, and by November the service had picked six to submit sample weapons for testing. The SCW is reportedly destined for U.S. Army special operations forces, which could include Delta Force, Special Forces, Rangers and other units as a close quarters battle weapon.

Another likely user of the SCW—the Army's Personal Security Details. PSDs originated in the Iraq War as groups of highly trained soldiers designed to protect officers and NCOs at the brigade level. The fluid nature of combat in Iraq meant that officers and their staffs traveling from one location in their unit's area of responsibility to another could come under attack by insurgents. In Iraq in 2006, the commander of the 4th Brigade Combat Team, 4th Infantry Division had two PSD teams of fourteen soldiers each. The 4th Brigade command sergeant major likened PSDs to the Secret Service personnel assigned to protect the president of the United States.

PSDs, in particular, would benefit from a sub-compact weapon. Although PSDs don't wear suits like the Secret Service and need to conceal their weapons under clothing, they do ride shotgun in air and ground vehicle convoys. PSD troopers will spend long hours inside vehicles where they could use a subcompact weapon that stores easily by their side. In addition, a short-barreled weapon would allow a PSD soldier to draw his or her weapon even from the confines of a Humvee or truck cabin, returning fire without dismounting.

Sig Sauer’s new short-barreled MPX Copperhead submachine gun was made public at the 2019 SHOT Show, a firearm industry trade event held in January 2019 in Las Vegas, Nevada. The Copperhead was revealed just months after it was announced Sig was one of the six companies that had won the right to submit a weapon for Army evaluation purposes, arousing suspicions it is the civilian version of Sig’s SCW entry.

The Copperhead is a gas piston powered weapon with an overall length of 14.5 inches and a width of 2.5 inches. It has a height of 8 inches. The Copperhead is chambered in 9x19-millimeter with a 3.5-inch barrel. The barrel is equipped a built-in flash hider in order to keep the overall barrel length as short as possible. The new weapon also carries over the interchangeable barrel system from other Sig Sauer MPX guns, allowing the installation of a longer barrel. This could also conceivably include threaded barrels, making aftermarket muzzle devices and suppressors a possibility.

Another clue that Sig's new sub gun was designed for the Army's SCW lies in its name. The Copperhead is finished in Cerakote color #E190, a coppery color similar to the dark tan Coyote color and very similar to the finish on the Army's new service pistol, the M17, also manufactured by Sig Sauer.

Ergonomically, the Copperhead is fully ambidextrous, with the charging handle, selector switch, magazine release, and bolt release all equally accessible to both right and left-handed shooters alike. The Copperhead comes with Sig Sauer's Pivoting Contour Brace, allowing it to be fired both from arm brace or the shoulder position, but can be equipped with other stocks sold by the company for the MPX line.

The Copperhead, like its bigger brother the Sig Sauer MPX, is a piston operated weapon with a manual of operation very similar to the U.S. Army's M4 carbine. The Copperhead's upper and lower receivers resemble that of the M4, and the new submachine gun uses a charging handle and bolt release, making operating the two weapons very similar. (While there are significant differences between the M4 and Copperhead internally, externally they are functionally identical.) Civilian shooters accustomed to AR-15s would find the Copperhead quick to pick up and master.

There are a number of other features. As requested by the U.S. Army, it has a full-length Picatinny rail for the attachment of aiming devices, including front and rear iron sights, red dot sights and holographic sights. The Copperhead is sold with one twenty-round magazine and can accept 9x19 magazines meant for other guns in the MPX line—including ten and thirty round magazines.

Whether or not the MPX Copperhead was expressly designed for the Army’s Sub Compact Weapon program or not is a matter of speculation, but we can be fairly sure that the MPX system, in one form or another, was submitted for the service’s consideration. The Copperhead could be the closest thing a civilian can buy to a weapon issued to highly trained Army protection teams.