Meet The Springfield Armory Saint: A Powerful Home and Self Defense AR Pistol 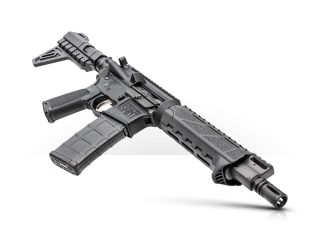 Ever since the AR-15 debuted, the formula has remained largely the same. In the last decade, gun companies introduced innovations that shook up the mold. One of these innovations, the .300 Blackout round, allows a shooter to design a bullet for almost any application. Springfield modified their new AR-15 design into an AR pistol chambered for .300 Blackout in the Springfield Armory Saint .300 AAC Blackout AR-15 Pistol. Let’s break down the specifics.

The SAINT demonstrated great accuracy for an AR pistol—especially if it’s equipped with an AR pistol optic. Springfield designed the SAINT to be effective at a maximum range of 200 yards. At 100 yards, the SAINT hit fist-sized targets with ease. When loaded with subsonic rounds, the SAINT hit center mass at 100 yards (the maximum effective range). With supersonic rounds, the SAINT hit 2-inch groups. The SAINT comes equipped with Springfield’s Accu-Tite system. The system tightens upper & lower receivers, reducing looseness. When all other aspects of the gun are equal, greater tightness means greater accuracy. The SAINT doesn’t come with any sights provided, but the 1913 Picatinny rail on the top allows easy installation of a wide variety of sights. In short, the SAINT is about as accurate as AR pistols come.

One of the main advantages of a weapon that can fire .300 Blackout is the almost limitless varieties of ammunition it can shoot. This wide variety of ammunition also presents design challenges for cycling and firing consistently. Unfortunately, the SAINT faces a host of issues with jamming, particularly with subsonic ammo. These issues include light primer strikes failing to fire the round to cycling problems. Some jams required complete disassembly of the gun. The SAINT is listed as coming with an adjustable gas block. This would theoretically allow the gun to reliably cycle different kinds of ammo by changing the pressure used to push a new round in the chamber. However, several reviewers reported no change when adjusting the block. Most shooters found the SAINT generally worked better with supersonic ammunition. The SAINT’s well-documented issues with subsonic ammunition is a major concern and one you should consider before buying this gun.

The SAINT comes equipped with a comfortable M-LOK handguard. The handguard does get hot when shooting, so be sure to wear gloves when shooting the SAINT. Otherwise, you’ll have to wait for it to cool down after firing a few magazines. The SAINT also has M-LOK slots on the bottom and sides of the gun, accommodating a front swivel. The SAINT also comes with a swivel mounting point built into the receiver end plate, allowing you to attach a sling. The SAINT itself is very compact (only 27.75 inches long), a great size for home defense. The SAINT’s ergonomics were fantastic. The pistol grip has texturing to prevent slipping when wet or dusty, and comes equipped with a hinged door on the bottom of the pistol grip. The door opens to reveal a small storage space inside. The storage space boasts a water-resistant rubber gasket, so you can store gun oil inside. The pistol brace (an SB Tactical SBX-K brace) is fixed (non-adjustable). The buffer tube was long enough that I couldn’t reach the controls when holding the SAINT one-handed. The Velcro in the brace can be somewhat abrasive, but I only noticed it when using higher velocity rounds. All in all, the SAINT handles well and is a perfect weapon for CQB engagements.

The SAINT’s trigger is a standard mil-spec trigger. It had some take-up, but broke at 6-6.5 pounds. While not match-grade, it gets the job done. The trigger is coated in nickel boron, a corrosion inhibitor. A feature I liked was the enlarged trigger guard, allowing easy shooting with winter gloves. The SAINT has an average trigger that gets the job done.

The SAINT comes with a 30 round .300 Blackout Gen M3 PMAG. The .300 Blackout round is a shortened 5.56 case & a .30 caliber bullet put together. .300 Blackout rounds achieve greater muzzle velocities than other bullets in AR pistols. This allows the round to pack a heavier punch than other bullets at the same muzzle length. Not only can it pack a heavier punch, the .300 Blackout can be tailored for a variety of uses. For bullets with 110 grain (>2400 fps), the Blackout can be accurate up to a maximum range of 200 yards. It can also shoot 225 grain (<1000 fps) rounds that are subsonic, meaning the noise generated by the round is significantly less than a supersonic one. Put a suppressor on the SAINT, and you shoot silently while still lethal up to 100 yards away. Special Operations units have looked into and use the .300 Blackout for missions. The .300 Blackout round the SAINT shoots offers lots of intriguing possibilities.

Coming in at 27.75-inches long and only 5 lbs, 9 ounces, the SAINT is a compact weapon perfect for home or vehicle defense.

The SAINT comes at an MSRP of $1,049. It’s not as cheap as budget AR-15’s or pricey as top of the line AR-15's. This AR pistol is an average price for the features it provides.

The Springfield Armory Saint .300 AAC Blackout AR-15 pistol is an intriguing weapon. This gun can be tailored for a wide variety of tasks, from pig-hunting to subsonic shooting. The significant cycling issues (particularly with subsonic ammunition) make this a tough buy. Let’s recap some of its features.

In short: if you’re looking for a .300 Blackout gun to take to the range, pick up the Springfield Armory Saint .300 AAC Blackout AR-15 Pistol! It’s accurate, compact, and insanely reliable.