Meet the T-Rex: The F-22 Raptor Transforms Into a Bomber 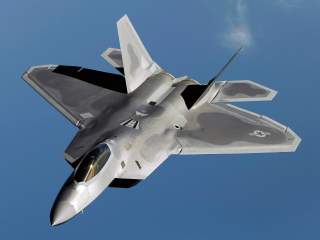 China is working on a medium-range stealth bomber, a bridge between the J-20 stealth fighter and the larger strategic bomber the People’s Liberation Army Air Force has long sought. News of this project has rekindled interest in the story of America’s own abortive stealth medium-bomber, if not in the acquisition of the aircraft itself.

Indeed, for a short time the United States strongly considered building its own stealth medium bomber, based on the F-22 Raptor. A collision of short-term need and long-range thinking killed the FB-22 “T-Rex” before it could get off the drawing board.

The T-Rex took as much as possible from its sister-vehicle, the F-22. Lockheed Martin hoped that the commonality of parts and design between the two aircraft could keep costs low, relative to expectations for a fifth-generation fighter bomber. Using the F-22 fuselage with a larger (delta) wing, the FB-22 would have been fast (mach 1.92) with a long range (1600 miles, compared to 600 for the Raptor). It would have carried 15000# of ordnance in a stealth configuration, and roughly double that in non-stealth mode. The designers also included some provision for wing pods and hard points that would have allowed the aircraft to remain stealthy while carrying external fuel or weapons. Although not much of a dogfighter, the FB-22 would have retained some degree of air-to-air combat capability.

The FB-22 would have filled a medium bomber niche that has long existed between fighter-bombers and attack aircraft on the one side, and strategic bombers on the other. In World War II the B-25 Mitchell filled the role. In the immediate post-war period medium bombers played both conventional and nuclear roles, with such aircraft as the B-47 Stratojet offering a high speed, medium range option for striking the Soviet Union. Medium bombers played important conventional roles in the Vietnam War, the Gulf War, and in a variety of other small conflicts from the 1960s until the 1990s. These aircraft included the B-57 Canberra, the F-105 Thunderchief (more of a heavy fighter-bomber configured into a medium bomber role), and the FB-111 Aardvark, a large interceptor that proved ideal for a medium bombing mission.

Compared to the FB-111, the T-Rex would have carried a roughly similar payload, with somewhat lower speed and range. It would have made up for this with stealth, which would have enabled the FB-22 to carry out strikes into heavily defended airspace without the large-scale strike packages that the U.S. Air Force developed in Vietnam and used in the Gulf War. Such an aircraft would extend and enlarge the tactical and operational promise offered by the F-117 Nighthawk, without resorting to the use of slow, stealthy strategic bombers such as the B-2 Spirit. The Navy’s A-12 stealth medium bomber would have performed similar missions from aircraft carriers.

The FB-111 and (on the Navy side) the A-6 Intruder were both retired in the 1990s, as in-flight refueling and the presumptive command of the air made the range advantages of medium bombers less relevant. The collapse of the Soviet Union reduced tension on the strategic bomber force, enabling the USAF to develop innovative new ways of employment for its heaviest bombers. Under short term budget stress, neither the Navy or the Air Force had the luxury of thinking about their long-term medium-range needs.

The Navy lost the A-12 shortly after the end of the Cold War. Lockheed Martin began to float the FB-22 in 2001, as production of the F-22 began to mature. But the T-Rex was killed by two competing interests.  The first involved the wars in Iraq and Afghanistan. Like the Raptor, the FB-22 could make no uniquely relevant contribution to those wars, and by 2006 it had become difficult to advocate for projects that could not help win the immediate conflicts. Indeed, even if the FB-22 had survived initial scrutiny, it might not have lasted through the tenure of Secretary of Defense Robert Gates, who capped F-22 production.

Second, the Air Force was growing increasingly cognizant of the age of its strategic bomber force, which at that point included B-1B Lancers, B-52 Stratofortresses, and a relatively small number of B-21 Spirits. The Air Force knew that it would need a new bomber to replace the B-1B and the B-21, and it feared that the FB-22 would undermine that case, in the same way that the existence of the F-111 made it more difficult to acquire the B-1. Consequently, even with the promise of a stealthy, medium ranged attack bomber at a reasonable price, the FB-22 struggled to find a strong patron. And without a patron, the project had little chance of making it through Congress. Thus, the FB-22 never made it past the initial conceptual stage.

The United States has had cause to regret the cancelation of the F-22 at 187 aircraft. Whether the USAF will regret the loss of the FB-22 is another question entirely. Medium bombers have historically sat at an uneasy juncture in airpower doctrine, fitting comfortably into neither the fighter nor the bomber families. Indeed, the F-111 was not particularly beloved by the Air Force, although it did fulfill a need for a long period of time. And as “strategic” bombers like the B-1B and B-52 have increasingly taken on “medium” roles other than penetration strike, it is understandable that the Air Force preferred to concentrate on the larger, longer-ranged B-21 Raider. However, foreign developments can often impose a degree of clarity on acquisition planners, and the USAF may someday have reason to reconsider the development of a stealth medium bomber.