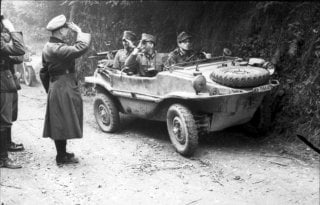 This amphibious four-wheel drive car was essentially a bathtub with wheels—and Nazi Germany’s answer to the American Jeep.

The Schwimmwagen, or swimming car as it was known in Germany, was designed to excel in both on and off-road environments—and in the water. It was designed by Volkswagen in tandem with Volkswagen’s Kübelwagen vehicle, another small 4-seater troop transport car.

The Schwimmwagen had a manual transmission, and first gear was four-wheel drive only. In order to aid off-road performance, the little boat car had portal axles, which increased the Schwimmwagen’s ground clearance, and had the added benefit of increasing torque at the wheel. Like the Jeep, the Schwimmwagen’s windshield could fold outwards onto the hood, and came equipped with a convertible-style sunroof that folded rearward. Though cramped, there was space onboard for three passengers plus a driver.

The propeller was not connected directly to the steering wheel and could not turn. Direction was provided by the steering wheel, and the two front wheels acted as dual forward-mounted rudders. This video shows how easily the propeller could be dropped into the water and started. The three-bladed propeller had a sprocket at its base that attached to a corresponding sprocket in the rear of the wagen. Speed was controlled simply by depressing or releasing the accelerator.

The Schwimmwagen was surprisingly stable in the water—passengers in the front and the rear could stand up inside the wagen without causing the boat car to flip or take on water, though the car would not have done well with waves of any height and was better adapted to small lake or river crossings. The Schwimmwagen also had onboard oars that could be used if the engine failed, or for tight maneuvers like reversing while in the water.

For very cold winter conditions, the wagen was outfitted with a small auxiliary fuel tank that contained a volatile type of fuel to aid starting. One of the great benefits of the Schwimmwagen design was the engine’s cooling system.

In contrast to the American Jeep, which was water-cooled and had a large radiator that was quite fragile and vulnerable to bullets or shrapnel, the Schwimmwagen’s engine was air-cooled and thus did not have (or require) a radiator, which made it quite robust and reliable. Somewhat surprisingly, the Schwimmwagen’s engine was fairly modest, just 1,130 cc and had an output of just 25 horsepower.

The Schwimmwagen was the most-produced amphibious car in history. Perhaps somewhat ironically, very few working Schwimmwagens exist, probably due to their wartime application.