Meet the Yak-26 Mandrake, the Spy Plane Israel Was Never Able to Kill 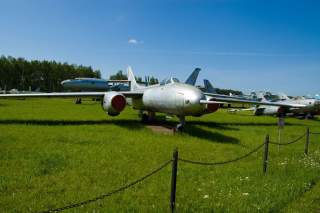 They had stripped several Phantoms of non-essential gear to improve performance and were armed only with AIM-7 Sparrows. Sitting alert, it was hoped that the jets could be launched with sufficient warning to perform a zoom climb from Mach 1.4 to 44,000ft (13,410m) and launch their missiles in a high nose-up attitude and leading the target. However, the proximity fuse of the missiles and the Phantom’s fire control computer were not suitable for such engagement conditions and the warheads detonated too late.

The reason the Israeli Air Force (IAF)worked so hard to obtain the F-4 in the late 1960s, and relied on it for so much, is clear. The big jet’s range, payload, and bombing accuracy were superior by orders of magnitude to anything they had operated up to that time.

In fact, after having been acquired in 1969 the Phantom quickly became the backbone of the IAF.

By October 1973 the IAF claimed 11 kills to the Phantom’s credit.

However, there were some adversaries that the Phantom would never be able to catch. During 1970 the Soviet Union began flying Yak-26 Mandrake high-altitude reconnaissance missions over Israel. This aircraft proved unreachable. Soviet MiG-25R (X-500) photo-recce flights, as fast as Mach 3.2 and 73,000ft (22,250m) altitude, were also conducted from Egypt by Soviet pilots beginning in March 1971. The first ‘Foxbat-B’ flights, parallel to the Canal and perhaps into the Sinai, may have occurred in October 1971. As explained by Bill Norton in his book Air War On The Edge: A History of the Israel Air Force and its aircraft since 1947, the most worrisome reconnaissance flight occurred on Oct. 10 when a pair of the jets flew parallel to the Israeli and Sinai Mediterranean coastline, 17 miles (27km) offshore, at Mach 2.5 and extreme altitude. Attempts to intercept the intruders were fruitless. Although initially only able to respond with recce overflights of their own and booming Cairo, by the time of the second MiG-25 intrusion (all flights with pairs of jets) over the Sinai on Nov. 6 the Israelis had a plan for meeting it.

They had stripped several Phantoms of non-essential gear to improve performance and were armed only with AIM-7 Sparrows. Sitting alert, it was hoped that the jets could be launched with sufficient warning to perform a zoom climb from Mach 1.4 to 44,000ft (13,410m) and launch their missiles in a high nose-up attitude and leading the target. However, the proximity fuse of the missiles and the Phantom’s fire control computer were not suitable for such engagement conditions and the warheads detonated too late. This failure and US experimentation in answering the ‘Foxbat’ threat resulted in the more advanced AIM-7F being delivered to Israel in 1974. Two more flights over the Sinai were made on Mar. 10 and May 16 of 1972. These flights were quite worrisome for the West, not for the intelligence they might gather but merely because of what they revealed about the performance of the MiG-25. For Israel the frustration of having their installations photographed with impunity ended when President Sadat ordered the Soviets out of his country in July.

At the end of October 1973 the Soviets again deployed ‘Foxbat-Bs’ to Egypt to monitor Israeli forces positions and movements. They apparently restricted themselves to flying to the west of the Canal and were withdrawn after nearly two years. There are claims that the EAF operated a MiG-25R briefly during 1974 and made one bold flight over Israel before the Soviets demanded that the aircraft be returned immediately. A ‘Foxbat’ detachment then appeared in Syria. Although flights over the occupied Golan Heights were probably made, especially during the tense period that followed the 1973 war, no attempts to enter Israeli airspace have been definitively reported.

Also, during the 1960s and probably later, the Americans conducted U-2 overflights of Israel to keep track of the Dimona nuclear plant and to gather other intelligence. The IAF Mirages and Phantoms were incapable of catching this aircraft as well.

It has also been claimed that IAF F-4s attempted to intercept and destroy a USAF SR-71 flying a reconnaissance mission over Israel or the Canal region on Oct. 13, 1973 during a sensitive period (there were possibly two Blackbird intrusions). If true, the SR-71 was ignorant of the intercept attempt and the Israelis risked losing the intelligence ‘take’ soon passed to them. In any event, the Blackbird easily climbed and accelerated away from the Israeli jets. The Egyptian also attempted an SR-71 intercept, with similar results. The intent may have been to discourage all such missions as the USSR was flying MiG-25s over the canal.

Only the introduction of the F-15 to the IAF in 1976 ended the overflights by both American and Soviet intruders. However, there is a report that an F-4, escorted by F-15s, downed a Syrian MiG-25 over northern Israel on Jul. 29, 1981.