Meet the YF-23 Black Widow II: The Stealth Fighter That America Passed On 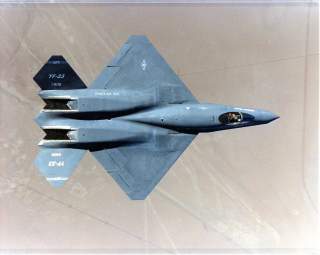 During the late 1970s, a new generation of Soviet fighters and Surface-to-Air Missiles (SAMs) prompted the U.S. Air Force (USAF) to find a replacement for the F-15 Eagle air superiority fighter.

The Northrop YF-23A was designed to meet USAF needs for survivability, ease of maintenance and supercruise. To satisfy the latter requirement two different engines (the Pratt & Whitney YF119-PW-100L and the General Electric YF120) were competing one versus the other too. Called Augmented Turbofans, these new engines would have allowed both the YF-22 and the YF-23 to fly supersonic without using the afterburner, resulting in fuel savings and increased combat radius and effectiveness.

Northrop built two YF-23A prototypes: the first YF-23 (serial number 87-0800), Prototype Air Vehicle 1 (PAV-1), was rolled out on 22 Jun. 1990 and took its 50-minute maiden flight on Aug. 27 with Alfred “Paul” Metz at the controls while the second YF-23 (serial number 87-0801, PAV-2) made its first flight on Oct. 26, piloted by Jim Sandberg. The first aircraft was painted charcoal gray and was unofficially nicknamed “Spider” and “Black Widow II”, the latter after the Northrop P-61 Black Widow of World War II because it featured a red hourglass marking resembling the marking on the underside of the black widow spider before Northrop management had it removed. The second prototype, which was powered by General Electric YF120 engines, was painted in two shades of gray and nicknamed “Gray Ghost”.

The YF-23 emphasized stealth characteristics: in fact to lessen weight and increase stealth, Northrop decided against using thrust vectoring for aerodynamic control as was used on the Lockheed YF-22A.

The first YF-23, with Pratt & Whitney engines, supercruised at Mach 1.43 on Sep. 18, 1990, while the second, with General Electric engines, reached Mach 1.6 on Nov. 29, 1990. By comparison, the YF-22 achieved Mach 1.58 in supercruise. The YF-23 was tested to a top speed of Mach 1.8 with afterburners and achieved a maximum angle-of-attack of 25°. The maximum speed is classified, though sources state a maximum speed greater than Mach 2 at altitude and a supercruise speed greater than Mach 1.6.

The aircraft’s weapons bay was configured for weapons launch, and used for testing weapons bay acoustics, but no missiles were fired; instead Lockheed fired AIM-9 Sidewinder and AIM-120 AMRAAM missiles successfully from its YF-22 demonstration aircraft.

PAV-1 performed a fast-paced combat demonstration with six flights over a 10-hour period on Nov. 30 1990. Flight testing continued into December, and saw the two YF-23s flying 50 times for a total of 65.2 hours. The tests demonstrated Northrop’s predicted performance values for the YF-23: the YF-23 was stealthier and faster, but the YF-22 was more agile.

The two contractor teams submitted evaluation results with their proposals in Dec. 1990 and on Apr. 23, 1991, Secretary of the Air Force Donald Rice announced that the YF-22 was the winner, while the YF119 was chosen over the YF120 to power the F-22. The Lockheed and Pratt & Whitney designs were rated higher on technical aspects, were considered lower risks, and were considered to have more effective program management.

Following the competition, both YF-23s, without their engines, were transferred to NASA’s Dryden Flight Research Center at Edwards AFB, California, where NASA planned to use one of the aircraft to study techniques for the calibration of predicted loads to measured flight results, but this did not take place.

Both YF-23 airframes remained in storage until mid-1996, when the aircraft were transferred to museums.

Noteworthy in 2004, Northrop Grumman proposed a YF-23-based bomber to meet a USAF requirement for an interim bomber, for which the FB-22 and B-1R were also competing. Northrop modified aircraft PAV-2 to serve as a display model for its proposal, but the chance for the YF-23 to serve in this role ended in 2006, when Quadrennial Defense Review favored a long-range bomber with much greater range, that evoleved in the Next-Generation Bomber program and then in the Long Range Strike Bomber (LRS-B) heavy bomber program. Eventually the LRS-B competition was won by Northrop-Grumman with its B-21 Raider.

Today the YF-23A PAV-1, Air Force serial number 87-0800, is on display in the Research and Development hangar of the National Museum of the United States Air Force near Dayton, Ohio, while the YF-23A PAV-2, AF ser. no. 87-0801, is on exhibit at the Western Museum of Flight, at Torrance Airport, Torrance, California.

However as explained by Air Forces Monthly Publication Stealth Operation Declassified, rumours persist that despite the two prototypes being retired, a classified strike variant of the YF-23 was developed to fulfil a role similar to that of the F-111.