Merkel's Exodus Will Leave a Void in EU-Russia Relations 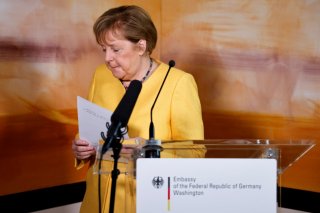 When German chancellor Angela Merkel steps down after the 2021 Bundestag elections, she will leave a substantial void in EU-Russia relations. During her time in the chancellery, Merkel saw the EU-Russia relationship deteriorate from a complicated partnership in the mid-2000s to a deep crisis in 2021. After Russia annexed Crimea and intervened in Ukraine’s Donbas region, she demonstrated a principled and clear-eyed view on Moscow’s actions and Russian president Vladimir Putin. Her efforts were crucial for delivering the EU’s economic sanctions on Russia and, later on, the Minsk Agreements. At the same time, Germany’s Russia policy under Merkel was often merely reactive and lacked strategic vision. This became particularly clear in the case of Nord Stream 2, which she consistently supported although it ran counter to Berlin’s sanctions policy, caused strife within the EU and isolated Germany in the transatlantic community.

The contradictions in Germany’s Russia policy are not Merkel’s doing alone. To some degree, they are linked to public sentiment in Germany. Many Germans hold a romanticized view of Russia, downplaying the existing fundamental conflicts of interest with Moscow. The somewhat naive belief that confrontation with Russia can be avoided by simply intensifying dialogue and economic cooperation is commonplace. These perceptions are deeply rooted and will continue to influence Germany’s policy going forward. The strong economic links with Russia also make it harder for Berlin to adapt to the new geopolitical realities it is now facing. Before Russia (and also China) became more openly hostile to the West, Germany’s economic interests mostly coincided with its foreign policy goals. Now, both are often colliding, as the example of Nord Stream 2 has shown. Increasing tensions mean that Germany is under pressure to position itself more clearly on the international stage and that Berlin needs a strong EU to defend its interests globally.

Over Merkel’s time in office, Germany’s Russia policy has become more deeply integrated in a common EU approach. This has also led to some constraints for Berlin: While Germany has a lot of political clout in Brussels, it cannot singlehandedly change the EU’s foreign policy. When Germany and France recently ambushed the rest of the EU with a proposal for an EU-Russia summit, smaller member countries refused to play along and successfully averted their plan. All of Merkel’s potential successors explicitly support a common EU approach to Russia. However, it is unclear if all of them are willing to accept the limits this sets for unilateral action. Given chancellor candidate Armin Laschet’s repeated calls to “talk more, not less” with Russia, there is a certain risk that he could attempt a new German dialogue initiative with Putin. This would weaken the EU’s credibility as a foreign policy actor vis-à-vis Russia.

Merkel’s most likely successors advocate for very different foreign policies in their election campaigns. The Christian Democratic Union’s Laschet stands for a continuation of the Merkel era approach, which includes sanctioning Russian violations of international law, but also protecting German-Russian business interests. The Green Party’s Annalena Baerbock has called for a break with the Merkel tradition. The Greens have a stronger focus on human rights and support for civil society abroad and are also skeptical of the dominant fossil energy links between Germany and Russia. These factors also explain Baerbock’s rejection of Nord Stream 2, which is her most significant concrete disagreement with Laschet. However, despite the different profiles of the front-running candidates, Germany’s foreign policy will most likely face only a gradual update once the dust of the election campaigning has settled. The most probable outcome of the election is a coalition government that involves both Laschet and Baerbock, leading to bipartisan compromise instead of radical change.

Janis Kluge is a Senior Associate at the German Institute for International and Security Affairs.

Leslie Schübel is a Master’s student of International Relations in Berlin and Moscow.