Mexico Does Not Deserve Credit For Falling Arrests At U.S. Southern Border 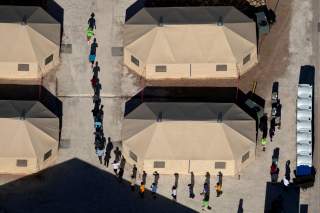 Mexico’s government has touted to President Trump its efforts to reduce migration of Central Americans through its territory to the United States and took credit for the drop in arrests of migrants at the U.S.-Mexico border since June. Yet Mexican immigration enforcement fails to explain the drop in immigrants reaching the United States for three reasons: 1) most who try are still making it, 2) the effectiveness of Mexico’s enforcement is slightly worse than the median month since October 2014, and 3) the drop has occurred mainly among families and unaccompanied children, while Mexican enforcement has mainly targeted adults traveling alone.

Figure 1 shows the number of arrests of immigrants from Central America’s Northern Triangle—Guatemala, Honduras, and El Salvador—by U.S. Border Patrol or Mexican authorities. The data reveal that Mexican enforcement is not only not unprecedented, but it is actually less effective than it was on numerous occasions in recent years. In September 2019, 61 percent of arrests occurred in the United States, indicating that most Central Americans evaded the crackdown. This is worse than the median month (59 percent) since October 2014, meaning Central Americans were less likely to reach the U.S. border in a majority of other months.

Figure 2 compares the likelihood of reaching the United States by the type of migrant. As it shows, the crackdown was more effective at stopping single adults than children with parents or unaccompanied children. More than 70 percent of unaccompanied children and children with parents made it to the United States in September 2019, compared to just 46 percent of single adults. Despite this focus on single adults, it was families and children whose numbers declined the most, falling 85 percent since May. Single adults have come down comparatively less: 64 percent. Many other months saw stricter enforcement.

Given these facts, it is more likely that other factors explain the absolute decline in arrests by the U.S. Border Patrol. The most important would be the inability of Central Americans to make asylum claims in the United States and the return of Central Americans into Mexican border cities under the “Remain in Mexico” policies. These actions—which have exposed numerous immigrants to crime, homelessness, and death—have likely deterred others from trying to seek safety in the United States.

Children and families are more likely to fear extended homelessness in Mexico, which explains why they were disproportionately affected by these policies. Single adults are also more likely to attempt to evade detection, so they are less influenced by changes in asylum policy. The United States has better alternatives to deal with this crisis than abandoning its asylum laws and treating asylum seekers like criminals. It should increase legal immigration and process asylum seekers at ports of entry.

This article by David Bier first appeared at The Cato Institute.