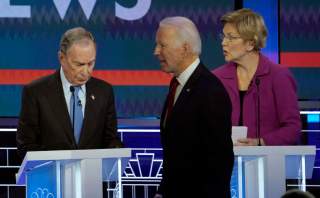 Bloomberg’s giant digital ad company, Hawkfish, would continue its work in battleground states ahead of the 2020 election, Tim O’Brien told CNN’s Anderson Cooper. He was referring to the agency that covered the air waves in slick pro-Bloomberg ads for the past four months.

“Hawkfish is an enormously successful voter identification and turnout tool,” he said, adding: “We have great field offices across the country — those are going to stay open in the battleground states. There is a lot we can continue to do on advertising.”

Biden’s campaign was at one time considered dead in the water before his major come back in South Carolina.

Bloomberg’s campaign dumped more than $234 million into TV, radio and digital ads in the Super Tuesday states. The former Republican plowed a total of more than $500 million into his ill-fated presidential campaign, according to CNN’s analysis.

The campaign pulled out the stops on social media, with the well-heeled New Yorker reportedly hiring more than 500 so-called deputy digital organizers in California to promote Bloomberg on Instagram and elsewhere. The team was hoping to get an edge in the Golden State ahead of Super Tuesday.

Bloomberg also employed the Meme 2020 project to help elevate his name. It launched in February and worked to place posts on one account with a meme page with more than 2.7 million followers. Jerry Media’s most popular account, “FuckJerry,” also pushed posts for the New York billionaire.

Bloomberg’s team managed to produce 444,156 ad airings since he jumped into the race in November 2019, the Wesleyan Media Project noted in an analysis published on Feb. 26. Sen. Bernie Sanders, meanwhile, produced only 60,467 ad airings to Biden’s paltry, 15,700, according to the analysis.

Bloomberg’s total was also more than former Secretary Hillary Clinton aired during her entire 2016 campaign. Bloomberg’s team has not responded to the Daily Caller News Foundation’s request for comment regarding what will now happen to Hawkfish or any of the other digital operations the campaign used to boost the former mayor’s ill0-fated White House bid.