Microsoft, Amazon Leading The Way To The Pentagon’s Multi-Cloud Environment 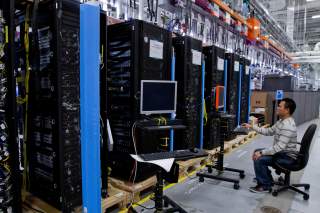 The Department of Defense (DoD) recently announced that two companies, Microsoft and Amazon, made the cut to compete for a contract to build the Joint Enterprise Defense Infrastructure (JEDI). The decision to allow Microsoft and Amazon to compete head-to-head for JEDI undercuts the arguments by some critics that the contract was wired for the latter. Moreover, even if Amazon were to win JEDI, this amounts to no more than 16 percent of overall Pentagon demand for cloud services. Given the rapid pace of technological change in this area and the rise of new entrants, DoD will have lots of options to create a true multi-cloud environment.

The goal of the JEDI project is to leverage the best in cloud computing technologies to build a highly-secure, enterprise-wide cloud environment capable of supporting the rapid collection, movement and analysis of all-source information. Because this attempt is the first-of-its-kind to create a cloud capable of supporting military operations from the Pentagon down to the foxhole, it is something of an experiment. If it is successful, DoD leaders have said it will follow JEDI with a series of purpose-built clouds that meet the needs of specific components and missions.

DoD’s strategy for JEDI takes a page from the successful effort of the Intelligence Community (IC) to exploit commercial cloud technology to improve its extremely sensitive work. The Central Intelligence Agency and National Security Agency manage the Commercial Cloud Services contract, which was won by Amazon, for all seventeen members of the IC. In essence, the IC had Amazon build a commercial cloud environment in government-owned spaces. This contract has reduced the time it takes to set up a server from 180 days to a matter of minutes. The CIA’s Chief Information Officer, John Edwards, declared that “it's the best decision we've ever made.”

After a number of years of working with Amazon and learning how to make the best use of a cloud computing environment, the IC expanded its activities. It recently awarded a contract to Microsoft for a second cloud similar in character to that built and operated by Amazon. To service the IC and potential DoD customers, Microsoft has built two specialized data centers capable of handling highly classified materials.

Critics of the Pentagon’s approach to the JEDI procurement argue that it is a mistake to award a multi-year, potentially multi-billion-dollar contract to a single company. Yet, DoD already has in place or is planning to award several other large, single-award cloud computing contracts. According to the Defense Information Systems Agency’s Cloud Service Catalog, DoD components currently employ dozens of cloud contracts of different scope, scale and duration.

One of the largest of these is milCloud, managed by the Defense Information Systems Agency (DISA) but built by the former CSRA, now General Dynamics IT. MilCloud 1.0 has been in place since 2013. It provides “Infrastructure as a Service solution that leverages a combination of mature commercial off-the-shelf and government-developed technology to deliver cloud services tailored to needs of the DOD.”

As one of the first large cloud contracts, DISA spent a lot of time educating potential DoD users on the virtues of milCloud 1.0 and on how to exploit its capabilities to access the features and applications that best suited a particular agency or Service. This is much the same approach that is being employed with JEDI. MilCloud 1.0 has been so successful that DoD recently awarded General Dynamics IT a contract for a new, larger and more expensive milCloud 2.0.

Another multi-year, multi-billion-dollar cloud computing contract which is expected to be awarded this year is called Defense Enterprise Office Solutions. This provides a range of capabilities including cloud-based email and messaging as well as infrastructure as a service solution with access to commercial off-the-shelf and government-developed technologies that can be tailored to the needs of individual DoD users. Although Microsoft is not bidding as a prime contractor, knowledgeable observers expect that it will dominate this award as a subcontractor due to its suite of cloud-capable office applications.

Each of the military services is also moving aggressively to the cloud. The Navy, for example, is expected to soon release the final Request for Proposals for a next-generation network, called NGEN-R. This is yet again another multi-year, multi-billion-dollar award. This procurement will encompass hundreds of thousands of workstations used by the Navy and Marine Corps both ashore and at sea. A key provision in the RFP is to allow the Navy to migrate activities and functions to the cloud.

While Amazon and Microsoft currently dominate the commercial cloud space, other companies, including Google, Oracle and IBM, are moving aggressively into this market. New technologies and applications, such as artificial intelligence and machine learning, could change the way cloud computing operates and how private and public entities use it. Moreover, customers are becoming more sophisticated, acquiring cloud services from multiple vendors and changing the way they use vendors. As they become more familiar with the options offered by cloud computing and more sophisticated in their use of the cloud, many private firms and even some government entities shift the way they employ cloud-based service. It is virtually certain that the changes that are occurring in the private sector’s use of cloud computing will also influence how the Pentagon behaves.

Regardless of which company, Amazon or Microsoft, wins the JEDI contract, the DoD IT space will remain a multi-cloud environment. The government cloud computing environment is truly a free market, in which the companies with the best offerings are likely to prevail.