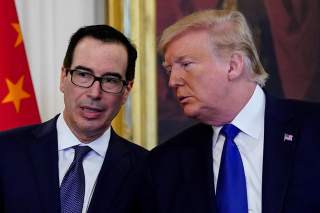 President Trump has alluded to plans for a middle-class tax cut. It is far from a sure thing and has very little specificity right now. It may just be a campaign ploy, as many described the 2012 announcement of middle-class tax cuts made by then-President Obama as that year’s election approached. If cuts were to go into effect this year or next, they would offer a near-term economic boost but also intensify an already troubling federal budget shortfall.

Trump certainly appears to have taken a page out of Obama’s campaign strategy. Facing that year’s election, Obama, in July of 2012 and with much fanfare, announced his decision to give the middle class a tax cut. Much of the media described it as an election-year ploy, but no one seemed to mind. The economy was still laboring to recover from the great recession. Budget deficits verged on a historically high 7 percent of the economy’s gross domestic product (GDP), almost twice their relative size today, but with ample room for growth, some argued, the stimulus of a tax cut might raise federal revenues enough to actually help close the deficit gap. Besides, what Obama proposed, though he used the words, “middle-class tax cut,” was not really a cut.  He wanted to extend the earlier Bush tax reductions on the middle class while raising rates at the upper end of the income distribution.

It is not apparent Trump means business with his tax-cut allusions. Details on what he might or might not do are vague, to say the least. White House spokespeople have said that staff is still working on the matter. Some from the White House have suggested that the rate on the middle bracket might move from 22 percent to 15 percent, but that hardly constitutes a policy. If anything develops, it would more than likely depend on whether the economy needs help as the country approaches the November vote.

Still, even just the consideration of tax relief seems to have created understandable budget concerns. If Trump were to do something, it would come at a much more problematic time in the economic and financial cycle than Obama’s “cuts” would have. The economy today is at full employment with limited room for rapid growth, much less the kind of cyclical growth surge possible early in a recovery, as was the case in 2012. What is more, budget deficits today, at 4.5 percent of GDP, though lower than 2012, are historically high for a time of nearly full employment. This state of affairs raises questions about the long-term strength of the nation’s finances even in the absence of another tax cut.

Beyond such general statements, the lack of detail about what the White House is even considering makes any calculation speculative at best. From what administration people have said about this “tax cut 2.0,” especially the reference to a particular tax bracket, suggests that plans would involve some kind of an extension of the individual tax bracket reductions implemented in the 2017 tax law. That earlier effort retained the seven tax brackets of the old law but reduced the rates associated with each of them. The lowest four brackets, covering incomes from lower than $10,000 a year up to $321,500 for married people filing jointly, averaged rate cuts of 2.5 percentage points, an 11.5 percent drop in the tax bill. The top three brackets saw smaller rate reductions of 1.2 percentage points on average, a 3.2 percent reduction in the tax bill.  Presumably, the prospective cuts would follow along these lines.

If something like this were enacted, there could be little doubt about two things: 1) The U.S. economy would enjoy an immediate lift, as people spent their increased after-tax income.  2) The federal budget deficit, already uncomfortably large for this stage in the economic cycle, would grow even larger. If this next phase were to duplicate something similar to the 2017 law, the policy could add some 0.5-0.6 percentage points to the pace of real growth for the next couple of years. The lift would fade over the longer-term, however, especially since the 2017 cuts are scheduled to sunset in 2026, and so presumably would this second round of cuts. The government revenue loss from the tax reductions, according to an analysis done at the University of Pennsylvania Wharton Business School, would add some $800 billion to budget deficits over ten years, rising by some 35 percent to the debt otherwise expected to accumulate over that period.

Were the economy in recession or just emerging from one, as it was when Obama announced his “tax cut” (that was not really a cut), this prospect would look manageable in economic terms. With high rates of unemployment at the time and business using only some of its existing productive capacity, that economy had ample room for rapid growth that, presumably, would have enlarged federal revenues and closed the budget gap. But now with unemployment at 50-year lows and productive capacities all but fully utilized, there is less room for rapid growth and certainly not the cyclical surge that more concerted policy action in 2012 might have engendered.

Today’s budget deficits make matters still more problematic. The red ink estimated for 2020 at 4.5 percent of GDP is almost twice what deficits typically run at strong points in the economic cycle. Even before considering the financial effects of more tax cuts, official estimates expect a $1.3 trillion accumulation of new debt over the next ten years, bringing the total federal debt outstanding to almost $25 trillion. Adding $800 billion more red ink to this total from tax cuts might seem a small matter, but it cannot help but exaggerate any ill effects of an already huge financial burden. It may be impossible to reliably estimate the impact of such a debt burden on economic growth prospects, but it is nonetheless easy to conclude that such a net addition would hardly help the economy’s health.

Since no such cuts have passed or even been proposed, this troubling picture is more of a warning than a forecast. Should the economy remain acceptably strong into the election, the administration may not even see a need for the stimulus of additional tax cuts, for the middle class or for anyone else. Trump might simply use the promise as an election ploy, as Obama did with his strange tax “cuts” in 2012.  There is also the possibility that the administration goes ahead with individual income tax rate reductions but uses other policy measures to offset their budget impact. A carbon tax, for instance, has gained adherents, even among Republicans. Its passage would not only refill federal coffers from a “middle-class income tax cut” but also create a demand for relief since the middle class ultimately would bear the burden of a carbon tax. Beyond this, the possibilities for amelioration and offsets, if not infinite, are sufficient to dissuade reasonable people from any firm prediction.