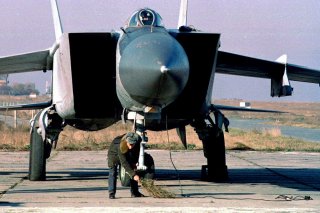 In 1982, Hollywood icon Clint Eastwood produced, directed and starred in the film adaptation of the Craig Thomas novel Firefox, which told the story of an effort to steal the advanced Soviet MiG-31 fighter aircraft—not to be confused with the real MiG-31 Foxhound. The fictional aircraft as described was capable of reaching speeds of Mach 6 and was invisible to radar. The film crashed and burned; it received mostly negative reviews for its tedious plot and underwhelming special effects that included an aircraft that resembled the American SR-71 Blackbird.

The actual novel featured an aircraft that was more cosmetically similar to the real-world MiG-25, an aircraft that was a very real concern in the West when it first entered service in 1970. In fact, throughout the decade, few details were known about the radically advanced aircraft, and whilst it may not have had some of the more advanced features of the fictional MiG-31, the very real MiG-25 was just as notable for a number of reasons.

The Mikoyan-Gurevich MiG-25, known by NATO as Foxbat, was the last aircraft designed by Mikhail Gurevich before his retirement, and it was developed as a supersonic interceptor and reconnaissance aircraft. Today, it remains among the fastest military aircraft to enter service and is the fastest manned serially produced aircraft in operational use.

Its capabilities were better understood in 1976, when Soviet pilot Flight Lt. Viktor Belenko flew his MiG-25 to an airport on the Japanese island of Hokkaido. At the time, it was unlike any aircraft to ever land at the remote airstrip—and Belenko's defection allowed the west to study the aircraft.

What surprised western observers was the aircraft's size. It was enormous; its size was just a few feet shorter than a World War II-era Lancaster bomber. The reason it reached that size was to accommodate the engines. It was also not as advanced as some may have speculated and it certainly was the sci-fi-worthy MiG-31 of the novel.

The Soviet interceptor was actually developed to counter the U.S. Air Force's SR-71 Blackbird and other high-speed aircraft including the then-experimental XF-108 Rapier and XB-70 Valkyrie bomber. The Foxbat may have seemed advanced at a distance, but those looks were deceiving.

Unlike the Blackbird, which was built out of titanium to withstand the heat generated by the friction at high speeds, the Foxbat was largely built out of nickel-steel alloy and was welded together by hand. The Foxbat could fly at extreme speeds but in doing so it would risk damage to the airframe and engines. Because of its size it was easy to track on radar (unlike the fictional MiG-31), and when the U.S. took apart the aircraft flown to Japan it was discovered the technology within was antiquated—including vacuum tubes rather than transistors, but that did ensure that it was still resistant to an electromagnetic pulse such as a nuclear blast.

The defection of the Belenko was also far less exciting than anything in the novel by Thomas or film by Eastwood, but a Hong Kong action film, Foxbat, was produced just a year after the incident. Co-written by Terence Young, who had directed the first three James Bond films, the plot involved the efforts to retrieve secret photos of the MiG-25 and get them back to the United States.

The reality was that the Japanese returned the plane after sixty-seven days—during which time it was taken apart and every piece photographed. In the end, the Japanese charged the Soviet Union some $40,000 to cover the shipping and the repairs need to the Hakodate airstrip. But the west better understood the plane, and perhaps didn't nearly fear it so much.