This Might be the Marines Ultimate Weapon: Osprey's Armed with Lots of Firepower 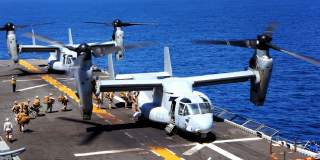 Adding weapons to the Osprey would naturally allow the aircraft to better defend itself should it come under attack from small arms fire, missiles or surface rockets while conducting transport missions; in addition, precision fire will enable the Osprey to support amphibious operations with suppressive or offensive fire as Marines approach enemy territory. Furthermore, weapons will better facilitate an Osprey-centric tactic known as "Mounted Vertical Maneuver" wherein the tiltrotor uses its airplane speeds and helicopter hover and maneuver technology to transport weapons such as mobile mortars and light vehicles, supplies and Marines behind enemy lines for a range of combat missions -- to include surprise attacks.

The Marine Corps is now arming its Osprey tiltrotor aircraft with a range of weapons to enable its assault support and escort missions in increasingly high-threat combat environments.

Rockets, guns and missiles are among the weapons now under consideration, as the Corps examines requirements for an “all-quadrant” weapons application versus other possible configurations such as purely "forward firing" weapons.

“The current requirement is for an allquadrant weapons system. We are re-examining that requirement—we may find that initially, forward firing weapons could bridge the escort gap until we get a new rotary wing or tiltotor attack platform, with comparable range and speed to the Osprey,” Capt. Sarah Burns, Marine Corps Aviation, told Warrior Maven in a statement.

Some weapons, possibly including Hydra 2.75inch folding fin laser guided rockets or .50-cal and 7.62mm guns, have been fired as a proof of concept, Burns said.

“Further testing would have to be done to ensure we could properly integrate them,” she added.

“We want to arm the MV-22B because there is a gap in escort capability. With the right weapons and associated systems, armed MV-22Bs will be able to escort other Ospreys performing the traditional personnel transport role,” Burns added.

The Hydra 2.75inch rockets, called the Advanced Precision Kill Weapons System (APKWS), have been fired in combat on a range of Army and Marine Corps helicopters; they offer an alternative to a larger Hellfire missiles when smaller, fast-moving targets need to be attacked with less potential damage to a surrounding area.

Over the years, the weapon has been fired from AH-64 Apaches, Navy Fire Scout Drones, Marine Corps UH-1Ys, A-10s, MH-60s Navy helicopters and Air Force F-16s, among others.

Bell-Boeing designed a special pylon on the side of the aircraft to ensure common weapons carriage. The Corps is now considering questions such as the needed stand-off distance and level of lethality.

Also, while arming the Osprey is primarily oriented toward supporting escort and maneuver operations, there are without question a few combat engagements the aircraft could easily find itself in while conducting these missions.

Overall, the Marine Corps is accelerating a massive modernization and readiness overhaul of its MV-22 Osprey to upgrade sensors, add weapons, sustain the fleet and broaden the mission scope -- as part of an effort to extend the life of the aircraft to 2060.

The common thread here is that airframes themselves, while often in need of enhancements and reinforcements, often remain viable if not highly effective for decades. The Osprey therefore, by comparison, is much newer than the B-52 or Chinook, to be sure. This is a key reason why Burns emphasized the "common" aspect of CC-RAM, as the idea is to lay the technical foundation such that the existing platform can quickly embrace new technologies as they emerge. This approach, widely mirrored these days throughout the DoD acquisition community, seeks to architect systems according to a set of common, non-proprietary standards such that it helps establish a new, more efficient paradigm for modernization.