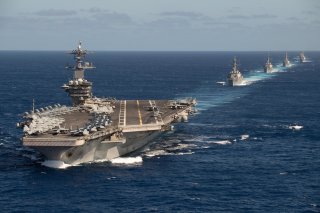 Here's What You Need To Remember: There are probably ways to break the Chinese kill chain using electronic or cyber-warfare that would allow a carrier strike group to fight inside the DF-26’s range. But once the missiles are en route, the key might lie in the Naval Integrated Fire Control-Counter Air (NIFC-CA) battle network combined with the firepower of the carriers’ escort vessels.

The U.S. Navy’s carrier fleet is increasingly challenged in the Western Pacific as China continues its efforts develop anti-access/area denial (A2/AD) capabilities. Some of those systems include the infamous DF-21D anti-ship ballistic missile and Xian H-6K bomber armed with advanced air-launched cruise missiles.

Many here in Washington believe that the solution to the problem is to increase the range of the carrier air wing so that the ship could standoff 1200 nautical miles offshore. That distance would allow the carrier to remain outside the range of Chinese A2/AD systems. The Navy would accomplish that task by developing a new class of unmanned long-range broadband all-aspect stealth aircraft that could penetrate even the densest air defenses.

However, there is one potential hiccup with that solution. The Chinese are more than capable of building even longer-ranged anti-ship ballistic missiles or cruise missiles. Indeed, China seems to have already done that with the introduction in recent months of the DF-26 “carrier killer” missile. U.S. Naval War College professor and TNI contributor Andrew Erickson wrote in September that the new missile might have a range as great as 2,500 miles.

There are probably ways to break the Chinese kill chain using electronic or cyber-warfare that would allow a carrier strike group to fight inside the DF-26’s range. But once the missiles are en route, the key might lie in the Naval Integrated Fire Control-Counter Air (NIFC-CA) battle network combined with the firepower of the carriers’ escort vessels. That might mean expanding the number of ships that can carry interceptor missiles under the distributed lethality concept or some sort of new ship that might be able to carry many more missiles than today’s warships—perhaps something akin to the Arsenal ship concept of yesteryear. That might eventually be combined with some sort of new naval interceptor aircraft to truly replace the now-retired Grumman F-14. Of course, interceptor missiles and aircraft are expensive. But, until railguns, lasers and some viable means to power those weapons are developed—it’s what we have.

There might not be a surefire way to keep the carrier perfectly safe because not every enemy is as inept as the Iraqi army was in 1991. The United States has to be willing to risk losing a carrier in a pitched battle. Otherwise, the carrier is no better than the battleship, which came to be an expensive white elephant as the aftermath of the Battle of Jutland showed.