This Might Be Where the Very First Total Nuclear War Starts 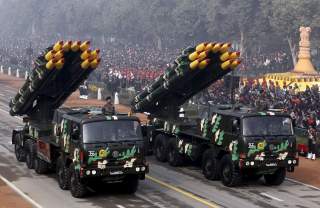 Undoubtedly, for nearly two decades the most dangerous place on Earth has been the Indian-Pakistani border in Kashmir. It’s possible that a small spark from artillery and rocket exchanges across that border might — given the known military doctrines of the two nuclear-armed neighbors — lead inexorably to an all-out nuclear conflagration. In that case the result would be catastrophic. Besides causing the deaths of millions of Indians and Pakistanis, such a war might bring on “nuclear winter” on a planetary scale, leading to levels of suffering and death that would be beyond our comprehension.

Alarmingly, the nuclear competition between India and Pakistan has now entered a spine-chilling phase. That danger stems from Islamabad’s decision to deploy low-yield tactical nuclear arms at its forward operating military bases along its entire frontier with India to deter possible aggression by tank-led invading forces. Most ominously, the decision to fire such a nuclear-armed missile with a range of 35 to 60 miles is to rest with local commanders. This is a perilous departure from the universal practice of investing such authority in the highest official of the nation. Such a situation has no parallel in the Washington-Moscow nuclear arms race of the Cold War era.

(This article by Dilip Hiro originally appeared at War is Boring in 2016.)

When it comes to Pakistan’s strategic nuclear weapons, their parts are stored in different locations to be assembled only upon an order from the country’s leader. By contrast, tactical nukes are pre-assembled at a nuclear facility and shipped to a forward base for instant use. In addition to the perils inherent in this policy, such weapons would be vulnerable to misuse by a rogue base commander or theft by one of the many militant groups in the country.

In the nuclear standoff between the two neighbors, the stakes are constantly rising as Aizaz Chaudhry, the highest bureaucrat in Pakistan’s foreign ministry, recently made clear. The deployment of tactical nukes, he explained, was meant to act as a form of “deterrence,” given India’s “Cold Start” military doctrine — a reputed contingency plan aimed at punishing Pakistan in a major way for any unacceptable provocations like a mass-casualty terrorist strike against India.

New Delhi refuses to acknowledge the existence of Cold Start. Its denials are hollow. As early as 2004, it was discussing this doctrine, which involved the formation of eight division-size Integrated Battle Groups. These were to consist of infantry, artillery, armor and air support, and each would be able to operate independently on the battlefield. In the case of major terrorist attacks by any Pakistan-based group, these IBGs would evidently respond by rapidly penetrating Pakistani territory at unexpected points along the border and advancing no more than 30 miles inland, disrupting military command and control networks while endeavoring to stay away from locations likely to trigger nuclear retaliation.

In other words, India has long been planning to respond to major terror attacks with a swift and devastating conventional military action that would inflict only limited damage and so — in a best-case scenario — deny Pakistan justification for a nuclear response.

Islamabad, in turn, has been planning ways to deter the Indians from implementing a Cold-Start-style blitzkrieg on its territory. After much internal debate, its top officials opted for tactical nukes. In 2011, the Pakistanis tested one successfully. Since then, according to Rajesh Rajagopalan, the New Delhi-based co-author of Nuclear South Asia: Keywords and Concepts, Pakistan seems to have been assembling four to five of these annually.

All of this has been happening in the context of populations that view each other unfavorably. A typical survey in this period by the Pew Research Center found that 72 percent of Pakistanis had an unfavorable view of India, with 57 percent considering it as a serious threat, while on the other side 59 percent of Indians saw Pakistan in an unfavorable light.

This is the background against which Indian leaders have said that a tactical nuclear attack on their forces, even on Pakistani territory, would be treated as a full-scale nuclear attack on India, and that they reserved the right to respond accordingly. Since India does not have tactical nukes, it could only retaliate with far more devastating strategic nuclear arms, possibly targeting Pakistani cities.

According to a 2002 estimate by the U.S. Defense Intelligence Agency, a worst-case scenario in an Indo-Pakistani nuclear war could result in eight to 12 million fatalities initially, followed by many millions later from radiation poisoning. More recent studies have shown that up to a billion people worldwide might be put in danger of famine and starvation by the smoke and soot thrown into the troposphere in a major nuclear exchange in South Asia. The resulting “nuclear winter” and ensuing crop loss would functionally add up to a slowly developing global nuclear holocaust.

Last November, to reduce the chances of such a catastrophic exchange happening, senior Obama administration officials met in Washington with Pakistan’s army chief, Gen. Raheel Sharif — the final arbiter of that country’s national security policies — and urged him to stop the production of tactical nuclear arms. In return, they offered a pledge to end Islamabad’s pariah status in the nuclear field by supporting its entry into the 48-member Nuclear Suppliers Group to which India already belongs. Although no formal communiqué was issued after Sharif’s trip, it became widely known that he had rejected the offer.

This failure was implicit in the testimony that DIA Director Lt. Gen. Vincent Stewart gave to the Armed Services Committee this February. “Pakistan’s nuclear weapons continue to grow,” he said. “We are concerned that this growth, as well as the evolving doctrine associated with tactical [nuclear] weapons, increases the risk of an incident or accident.”

Since that DIA estimate of human fatalities in a South Asian nuclear war, the strategic nuclear arsenals of India and Pakistan have continued to grow. In January 2016, according to a U.S. congressional report, Pakistan’s arsenal probably consisted of 110 to 130 nuclear warheads. According to the Stockholm International Peace Research Institute, India has 90 to 110 of these.

China, the other regional actor, has approximately 260 warheads.

As the 1990s ended, with both India and Pakistan testing their new weaponry, their governments made public their nuclear doctrines. The National Security Advisory Board on Indian Nuclear Doctrine, for example, stated in August 1999 that “India will not be the first to initiate a nuclear strike, but will respond with punitive retaliation should deterrence fail.”

India’s foreign minister explained at the time that the “minimum credible deterrence” mentioned in the doctrine was a question of “adequacy,” not numbers of warheads. In subsequent years, however, that yardstick of “minimum credible deterrence” has been regularly recalibrated as India’s policymakers went on to commit themselves to upgrade the country’s nuclear arms program with a new generation of more powerful hydrogen bombs designed to be city-busters.

In Pakistan in February 2000, President General Pervez Musharraf, who was also the army chief, established the Strategic Plan Division in the National Command Authority, appointing Lt. Gen. Khalid Kidwai as its director general. In October 2001, Kidwai offered an outline of the country’s updated nuclear doctrine in relation to its far more militarily and economically powerful neighbor, saying, “It is well known that Pakistan does not have a ‘no-first-use policy.’”

He then laid out the “thresholds” for the use of nukes. The country’s nuclear weapons, he pointed out, were aimed solely at India and would be available for use not just in response to a nuclear attack from that country, but should it conquer a large part of Pakistan’s territory (the space threshold), or destroy a significant part of its land or air forces (the military threshold), or start to strangle Pakistan economically (the economic threshold), or politically destabilize the country through large-scale internal subversion (the domestic destabilization threshold).

Of these, the space threshold was the most likely trigger. New Delhi as well as Washington speculated as to where the red line for this threshold might lie, though there was no unanimity among defense experts. Many surmised that it would be the impending loss of Lahore, the capital of Punjab, only 15 miles from the Indian border. Others put the red line at Pakistan’s sprawling Indus River basin.

Within seven months of this debate, Indian-Pakistani tensions escalated steeply in the wake of an attack on an Indian military base in Kashmir by Pakistani terrorists in May 2002. At that time, Musharraf reiterated that he would not renounce his country’s right to use nuclear weapons first. The prospect of New Delhi being hit by an atom bomb became so plausible that U.S. Ambassador Robert Blackwill investigated building a hardened bunker in the embassy compound to survive a nuclear strike. Only when he and his staff realized that those in the bunker would be killed by the aftereffects of the nuclear blast did they abandon the idea.

Unsurprisingly, the leaders of the two countries found themselves staring into the nuclear abyss because of a violent act in Kashmir, a disputed territory which had led to three conventional wars between the South Asian neighbors since 1947, the founding year of an independent India and Pakistan. As a result of the first of these in 1947 and 1948, India acquired about half of Kashmir, with Pakistan getting a third and the rest occupied later by China.