The Mighty AR-500 Rifle: The Most Dangerous Gun on the Planet? 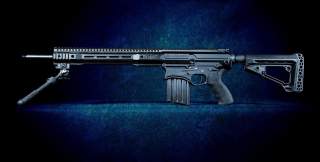 The AR-500 is identical functionally to other AR rifles, and an AR-15 user would have no problems quickly transitioning to the larger, heavier rifle. The rifle has a full-length Picatinny rail for attaching optics, lights, or laser accessories, six position adjustable buttstock, and a heavier recoil spring and buffer.