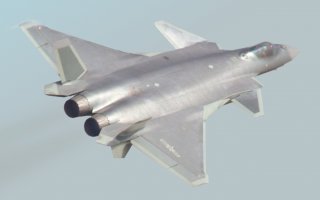 Back in November, there were reports that China was ramping up production on its J-20 stealth fighter jet, the country’s first fifth-generation fighter jet.

China, as of earlier this year, was known to have about 150 J-20 stealth fighters, which is far fewer than the United States has of its F-35A Lightning IIs or F-22 Raptors. However, there were hints at the time that China was accelerating the production of the J-20s. Back in January, the South China Morning Post reported that Chinese engineers had been “directed to modify the engine on the J-20 until it matches America's F-22 Raptor.”

This week, the Chinese government-backed media outlet Global Times reported that China is indeed ramping up production of the J-20.

Stating that the jet “recently broke records in terms of aircraft delivery due to high demand,” the report said that the jet recently entered the mass production phase after it discovered “the last missing piece of the puzzle,”—the domestically produced WS-10 engine.

At the Zhuhai airshow, back in September, the J-20 with the Chinese-made engine made its debut, the Eurasian Times said. However, that report said that the jet at the airshow was not the J-20B, the jet that entered production last July.

The J-20s are produced by the Chengdu Aircraft Industrial Group Co Ltd, which is backed by the state-owned Aviation Industry Corporation of China. The Global Times cited a social media post by the company stating that “multiple users were waiting to receive delivery of many aircraft.”

Fu Qianshao, a Chinese military aviation expert quoted by the Global Times, said that the switch to the WS-10 engines “has made mass production possible.” Previously the jets had relied on Russian-made engines.

"In a short time, we will be able to see J-20s operated by all eastern, southern, western, northern and central theater commands, and become the main force to safeguard China's sovereignty and territorial airspace security," Fu predicted, according to the Global Times report.

The Eurasian Times report looked at the history of China moving towards domestic production for the engines for the J-20 jets, citing “Beijing’s concerted efforts to achieve greater self-sufficiency in defense production.” In addition, Beijing has regularly highlighted the J-20 in parades and air shows.

At the same time, China can’t rely on the Russian engine, largely because “Moscow wants Beijing to buy more Su-35 fighter jets in exchange for the AL-31F engine sales. China was the first foreign customer to purchase Su-35 planes and spent US$2.5 billion on 24 Sukhoi Su-35 single-seat multi-role fighters.”