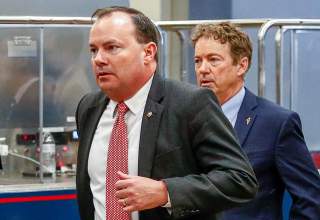 He grew up around the law and has a profound respect for the Constitution, its structure and purpose, and in particular, the separation of powers. His father, Rex Lee, was the 37th solicitor general of the United States, from 1981 to 1985.

So it is no surprise that Lee was peeved Wednesday when senior Trump administration officials—who briefed senators on the military operation Friday that killed Iranian Maj. Gen. Qassim Suleimani—would not answer his questions and concerns about separation of powers.

Despite media reports to the contrary, Lee was not criticizing the killing of Suleimani, nor was he “breaking with the president.”

The headlines blared that Lee said it was the “the worst military briefing ever on Iran.” True, he said that.

But what bothered Lee was not—as the media want you to believe—that he disagreed with the administration over the killing of Suleimani under the facts and circumstances. Rather, it was the briefers’ comments that Congress should not debate an authorization for use of military force with Iran, contending that such a debate would weaken the administration’s position with respect to Iran, and their unwillingness to answer the separation of powers issues.

The president, on the other hand, “shall be Commander in Chief of the Army and Navy of the United States,” under Article II, Section 2, Clause 1.  There is one, and only one, commander in chief of the armed forces, and he enjoys capacious authority to defend the nation. There is no dispute over these principles.

Suleimani, commander of the deadly Quds Force, posed an ongoing and imminent threat to American service personnel, according to the administration. His thugs and proxies were responsible for the deaths of hundreds of U.S. service members.

He traveled outside Iran routinely, despite a U.N. Security Council resolution prohibiting him from doing so. Under the facts made known to the public, he was a lawful military target under domestic and international law.

But what got under Lee’s skin was the briefers’ inability or refusal to answer a question put to them repeatedly regarding future military action against Iran, and under what circumstances the administration might come to Congress for buy-in.

At a press conference, Lee noted that the briefers were asked repeatedly, “What, if anything, would trigger the need for the administration to come back to Congress for a declaration of war or an authorization for the use of military force?”

“At one point,” Lee said, “one of the briefers said, ‘I think we could think of something.’ But they struggled to identify anything.”

Briefing members of Congress is always difficult, but it is part of the job for senior administration officials.

Lee has been consistent in his position over the years that the Constitution assigns to Congress the power to authorize war. He was critical of the Obama administration’s military activities in Yemen and Libya and Syria, and was public about it at the time.

It was entirely predictable, and quite reasonable, for Lee to ask under what circumstances the Trump administration could envision coming to Congress to ask for authorization to use military force against Iran.

Lee wasn’t questioning the administration’s self-defense argument for the use of force for this particular strike. In fact, he wasn’t pleased with the manner and tone of the briefers’ answers, and made his feelings clear on that point.

Stepping back from this incident, as I have written elsewhere, Congress has ceded its war powers to the executive branch for decades for a variety of reasons. Whether Congress decides to claw back its war power in a methodical, serious-minded way is an open question.

This article first appeared at the Daily Signal on January 9, 2020.