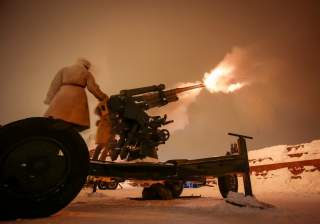 These days, lasers are the new hotness if you want your military to be on the cutting edge of air and missile defense. But during the Cold War, America looked to another then-cutting edge technology to keep the skies clean of enemies.

Hard as it may be to fathom now, the U.S. Army built and deployed nuclear-tipped Nike Hercules air defense missiles to dozens of sites across the U.S. and abroad. In the event that the Cold War ever turned hot, America would nuke the skies above to prevent the Soviets from nuking the ground below.

By the end of World War II, the U.S. military was beginning to realize that traditional anti-aircraft artillery just wasn’t going to cut it. The jet age had begun to reshape military aviation — and these planes could fly higher and faster than the guns could reach.

To keep up with the times, the United States kicked off the Nike program with the help of Western Electric Corporation, Bell Telephone Laboratories and Douglas Aircraft. The project would attempt defeat enemy air power with missiles instead of artillery.

The first incarnation of the Nike — the Nike Ajax — got a boost once the Soviets tested their first nuclear weapon in 1949. Suddenly, the threat of nuke-armed communist bombers was very real.

But before the Army finished the project, developers realized that the conventionally armed Ajax wouldn’t be enough to take on the Soviet bomber fleets. Enemy bombers could fly in formations too close for the Ajax to hit individual planes, and too loose for its warhead to take out more than one.

The Army needed more firepower in its missile.

The Army’s solution was the Nike B — later called the Nike Hercules. It looked a lot like the Ajax, but with more booster rockets, bigger drive engines … and a nuclear warhead.

The missile could use either a conventional warhead or a W31 nuclear warhead with a variable yield between two and 40 kilotons of explosive power.

In 1958, the Army began deploying the Hercules missiles around cities deemed important because of their industrial base and proximity to strategic military facilities. By 1963, the Army had replaced all its first generation Ajax missiles with the Hercules.

But Hercules had competition along the way. Inter-service rivalry is a part of any major weapons program. While the Army built the Nike Hercules, the Air Force worked on a nuclear-tipped air defense missile of its own — the Bomarc.

The Bomarc — a portmanteau of “Boeing” and the acronym for Michigan Aeronautical Research Center, its two creators — used a ramjet-powered missile to deliver a W40 nuclear warhead against airborne targets.

The Air Force wanted to see its own missile prevail over the Army’s. But the Bomarc versus Hercules fight carried more significance than the usual inter-service squabble.

The dawn of the nuclear era and Pres. Dwight Eisenhower’s desire to hold defense spending in check had made Army brass anxious about its future. The generals were tenacious about defending their nascent atomic foothold.

As the more logical bearers of nuclear weapons, the Navy and Air Force prevailed in most fights over budget and primacy in defense strategy. If soldiers wanted to be relevant in the atomic age, Army Chief of Staff Gen. Maxwell Taylor argued, they needed to carve out a nuclear role for the service and hold onto it.

The Air Force wasn’t going to give up easy. When the Army unveiled new Hercules missile sites, the Air Force seeded trash-talking articles in local papers about how Hercules wasn’t up to the task of defending the skies from Soviet bombers.

Despite the libelous claims, the Hercules was the superior weapon. It was a solid fuel missile where the Bomarc relied on liquid fuel, giving the Hercules an advantage in maintenance and altitude.

The Army also developed and deployed its weapon faster, making the Hercules the first nuclear-armed air-defense missile. But a Bomarc caught fire on June 7, 1960 and spread radioactive material across seven acres of land.

In response, the Air Force brass scaled back its support of the Bomarc in favor of funding more cherished service priorities, such as intercontinental ballistic missiles.

For its part, Congress split the purchase and bought 10 Bomarc sites and 145 batteries of the Nike Hercules.

Both Bomarc and Hercules missiles lasted into the early ’70s, and a handful of Nike Hercules sites linger in Alaska and Florida. But the Nike project’s most lasting historical contribution was providing the foundation for what became America’s missile defense program.

Alongside the Nike Ajax and Hercules programs, the military had been working on another project, the nuclear-equipped Nike Zeus missile. The Pentagon wanted the Zeus to defend against the other great nuclear menace of the Cold War — ICBMs.

A series of intercept tests showed that it was theoretically possible to use missiles in an anti-ballistic missile role. In November 1958, a Nike Hercules managed to knock out a high-flying supersonic target missile for the first time in history. Two years later, the Army used a Hercules to intercept a Corporal ballistic missile and another Nike Hercules.

The Nike Zeus program showed some early promise in testing, but Defense Secretary Robert McNamara canceled the program in 1963. He cited its inability to cope with multiple targets.

The Nike program kicked off the Pentagon’s interest in ballistic missile defense. That interest would span generations of people and technologies, from nuclear and conventional interceptor warheads to the directed energy weapons today.