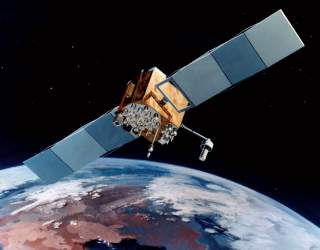 Key point: These drones could be used to spy on, or even attack, America's enemies.

The goal is to conduct research in space. But such platforms would also be useful for orbital surveillance and even for combat missions such as missile defense.

The Department of Defense wants proposals for developing “a self-contained and free-flying orbital outpost,” according to the Defense Innovation Unit, the Pentagon’s agency charged with rapidly acquiring advanced technology. “The solution must be capable of supporting space assembly, microgravity experimentation, logistics and storage, manufacturing, training, test and evaluation, hosting payloads, and other functions.”

With an internal volume of 1 cubic meter, or just over 35 cubic feet, the space station probably wouldn’t be much bigger than a large refrigerator. The DIU also wants a payload of just 80 kilograms (176 pounds), a power supply of just 1 kilowatt (1000 watts) and a communications link of just 100 kilobits per second. That’s larger than the toaster oven-sized cubesats being developed for military and commercial use, but still very modest compared to the International Space Station or the 1970s Skylab platform.

The Pentagon wants a miniature space station with several features:

-Other unique features contributing to national security or defense.

“Solutions must be established in low Earth orbit within 24 months of award and have guidance, navigation and control for sustained free-flight operations,” DIU said. “Favorable characteristics include modularity and scalability.” The project’s first phase will comprise design and engineering work, followed by testing of a prototype.

It’s an interesting wish list of capabilities. For example, modular and scalable means these platforms could be assembled Lego-like into a much bigger structure. Radiation hardening for beyond Low Earth Orbit suggests a space station farther than 1,200 miles above the Earth, which would give a spacecraft a far broader view of the Earth’s surface. Also noteworthy is that the mini-robot station design should be capable of being manned.

The little space station is part of a larger trend in aerospace: small, robotic and essentially expendable. Unmanned aircraft are moving away from large, expensive platforms -- such as the $220 million, airliner-sized Global Hawk recently shot down by Iran – to swarms of tiny drones operating collectively like a beehive. The same applies to robot warships and ground vehicles, while space satellites are shrinking down to cubesats about the size of a Rubik’s Cube.

But the project raises the question of why the U.S. military is delving into manned space stations, which has been the province of civilian agency NASA. In the 1960s, the Pentagon developed the Manned Orbiting Laboratory, or MOL, which would have been a military space station. The theory was that humans, using human judgment, could take better photographs of the Soviet Union than an unmanned spy satellite. The program was canceled in 1969, after the U.S. government decided that spy satellites could accomplish the job more cheaply. However, the Soviet Union did launch three Almaz military space stations (camouflaged as Salyut civilian space station flights) in the early 1970s. They were notoriously armed with a 23-millimeter space cannon that would probably have been useless in wartime.