Millions Dead: You Can't Imagine How Bad a Second Korean War Could Get 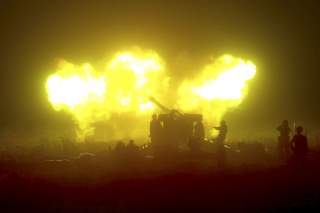 The costs of a second Korean war, then, would be massive: another possible two million or more Korean casualties; fifty thousand or more dead Americans; and the potential mass military mobilization of the U.S. civilian population for another land war in Asia.

The label of the North Korean state as a Marxist-Leninist regime, even of the particularly repressive Maoist Great Proletarian Cultural Revolution variety, is a misnomer. North Korea is a dynastic autocracy, ruled by a semidivine Kim family with absolute power over both the inner court and the general populace in a way comparable to a Henry Tudor or a Caesar. Even family members who fall into disrepute are not beyond bloody retribution. Just as a Korean king once sentenced his errant crown prince son to die in a rice box of starvation in the sweltering sun, so too Kim Jong-un recently struck down his own half brother with an internationally banned chemical weapon.The fanaticism of the North Korean public, in its devotion to its leader, is not some Broadway-like drama of feigned affectation. A visit to North Korea and discussion with members of the public at large revealed a clear devotion to the Kims. Implied was a willingness to die in defense of the juche philosophy and the great leader and his bloodline. North Korea, for almost four decades a colony of imperial Japan, has seemingly absorbed the kamikaze-like death wish of those pilots who once made a last-ditch suicidal stand to die for the emperor.