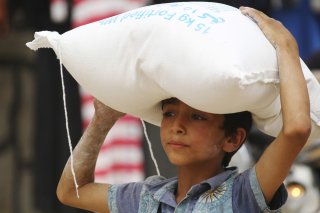 India is on track to overtake China as the world’s most populous country in 2023, according to a new United Nations report published on Monday.

Reuters reported that both India and China are expected to count more than 1.4 billion residents this year. The Indian government’s census for 2011 put the country’s population at more than 1.2 billion.

Eight countries—Egypt, Ethiopia, India, Nigeria, Pakistan, the Congo, the Philippines, and the United Republic of Tanzania—will account for half of the planet’s projected population increase by 2050.

The agency’s data further revealed that the world’s population was growing at its slowest pace since 1950, having fallen below 1 percent in 2020. Due to lower fertility rates, the population of sixty-one countries is projected to decrease by 1 percent or more between 2022 and 2050.

“In 2021, the average fertility of the world’s population stood at 2.3 births per woman over a lifetime, having fallen from about five births in 1950,” Reuters wrote. “Global fertility is projected to decline further to 2.1 births per woman by 2050.”

UN secretary-general António Guterres noted in a statement that “this is an occasion to celebrate our diversity, recognize our common humanity, and marvel at advancements in health that have extended lifespans and dramatically reduced maternal and child mortality rates.”

He added that “at the same time, it is a reminder of our shared responsibility to care for our planet and a moment to reflect on where we still fall short of our commitments to one another.”

Meanwhile, a top UN official warned last week that a record number of people worldwide are moving toward starvation largely due to the spike in food, fuel, and fertilizer prices initiated by the ongoing war in Ukraine.

According to the Associated Press, David Beasley, head of the UN World Food Program, stated that the agency’s analysis revealed that “a record 345 million acutely hungry people are marching to the brink of starvation,” which represents a 25-percent increase from 276 million at the start of this year before Russia invaded Ukraine in late February.

“There’s a real danger it will climb even higher in the months ahead,” Beasley added. “Even more worrying is that when this group is broken down, a staggering fifty million people in forty-five countries are just one step away from famine.”