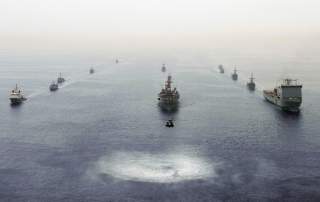 Key point: The Navy can now use sonar and video-guided underwater warheads to attack and destroy enemy sea mines at the bottom of the ocean.

The US Navy is making an aggressive push toward "offensive" mine warfare designed to attack and destroy enemy ships and submarines with undersea explosives - all while preparing a complex suite of interwoven mine countermeasure technologies.

“We will produce a mine warfare plan to include offensive mine lines of effort. We are asking the CNO (Chief of Naval Operations) to sign in the next 90 days,” Maj. Gen. David Coffman, Navy Director of Expeditionary Warfare, told an audience recently at the Surface Naval Association Symposium.

Mine technology, including both shallow and deep water mines, is not only advancing quickly but also rapidly proliferating around the world, therefore reaching a wider swatch of potential US enemies. Advances in offensive seamine technology is something the US plans to leverage itself while working to sharpen its focus on countering the growing mix of enemy mine threats.

Greater volumes of advanced “deep water” mines represent an area of concern for Coffman and other maritime warfare leaders, who recognize that the weapons are not restricted to littoral areas - but also substantial threats when it comes open or “blue” water warfare.

While it appears that the Mine Warfare Plan is currently being refined and reviewed by Navy leadership, Coffman indicated that the service’s offensive and defensive mine warfare strategy will seek to leverage US undersea technology superiority.

“We are making a strong push toward offensive mining using an undersea capability. We are drawing upon the CNOs wisdom in exploiting what we have strength in. We know we have dominance undersea,” Coffman said.

This approach is likely to draw upon some of the fundamentals of US undersea technology, such as advanced sonar, quieting technologies and submarine missile launch tubes increasingly able to launch mine-detecting drones.

Offensive mine technology will consist of a mixture of more detectable and hidden weapons, each consisting of different combat tactics.

“Covert is good and overt is good too. We need a lot of arrows in the quiver because there are different warfighting scenarios,” Coffman said.

Following Coffman’s reasoning, it would seem that more visible or “find-able” mines have a strategic and operational value - if less covert. Naturally they could be missed by an enemy or overlooked in some way, yet they certainly can function as weapons intended to “deny” an enemy access to a strategically vital location or asset. Covert mines, by comparison, would likely function with the more narrowly configured intent to avoid detection and simply “explode” an enemy.

There are a variety of ways in which this emerging Navy’s mine-warfare strategy is already becoming more manifest, to include video-guided undersea drone explosives, unmanned weapons and sensors and advanced airborne countermine technologies engineered to destroy mines beneath the surface.

This strategy, and its corresponding warfare technologies, will in part be executed by elements of the Navy’s now-in-development Mine Countermeasures (MCM) Mission Package for the Littoral Combat Ship. This includes specially configured MH-60 helicopters, deck-mounted drones such as the Fire Scout, surface sweeping drone boats such as Textron’s Unmanned Influence Sweep System and deep diving drones engineered to detect mines buried beneath the ocean floor - such as Knifefish.

The overall MCM system, integrating these and other technologies, is slated to be operational by 2022; however, several elements of the system are ready for war today, service developers said.

“For MCM, we can field the aviation mission packages on the even (Independence variants of the LCS fleet) ships today,” Capt. Ted Zobel, Mission Modules Program Manger, told Warrior Maven following his presentation at SNA.

The air assets, such as the Navy’s Airborne Mine-Neutralization System and Airborne Laser Mine Detection Systems, hinge upon successful coordination and command control synergy with surface and undersea assets. Naval Sea Systems Command recently announced it has has “verified” communications links between an Independence variant of the LCS and both the surface sweeping UISS and Knifefish mine-detecting drone.

The Navy now operates a series of test ranges for mine warfare, to include locations in Panama City, Fla., and San Diego, Zobel said.

“For each one of the program of records we put together, the mission package goes through its own test. We lay mine fields and go to work against them,” he told reporters at the Surface Naval Association Symposium.

The development of MCM technologies is, by design, intended to lay the foundation for new mine warfare systems in future years. The effort, Zobel said, is called "Mission Package Next."

“We talk with the research sponsors regularly about “Mission Package Next” and what it might entail. We scan industry to see what is available, but right now we are focused on the three mission packages we have,” Zobel explained.

Instead of purely relying upon more narrowly configured, mechanized or towed mine detection systems, the Navy has been developing airborne laser systems to expand the surface area from which mine detection takes place.

The system, called Airborne Laser Mine Detection System (ALMDS) enables shallow-water warships such as the LCS have a much safer sphere of operations as commanders will have much greater advanced warning of mine-cluttered areas.

“We are looking at automating the entire kill chain for MCM. Now the ALMDS flies on an MH-60. Perhaps we can get that into a smaller form factor and put it on the Fire Scout,” Kevin Knowles, Director of Business Development for LCS, Northrop Grumman, told Warrior Maven in an interview at SNA.

Cook explained that the camera or receiver on the helicopter is called a Streak Tube Imaging LIDAR (STIL). The laser is released in a fan pattern, and photons received back are transferred into electrons, creating a camera-like image rendering.