Minimum Wage in California Will Rise to $15 in 2022. It Might Mean Disaster. 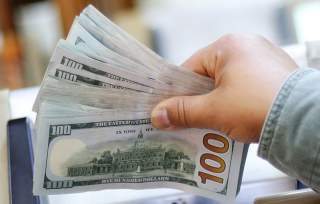 Issues such as job losses and automation have become concerns for the American people as technology transforms our economy.

Some have proposed universal basic income and other policies to solve these problems, but they risk sapping the dignity of work and creating a kind of bifurcated warehouse society with huge numbers of people barely skating by on welfare.

The false notion that America must inevitably become a nation of welfare dependents and the super-rich is toxic to the idea of the American dream.

Instead, we should look to avoid policies that harm Americans’ potential to enter the job market.

Minimum wage increases are supposed to be great for low-income workers and a boon to working-class Americans. However, mounting evidence suggests that’s not the case.

In 2016, California passed legislation to raise the minimum wage to $15 an hour, and the law is being phased in with incremental increases.

At the start of this year, The Sacramento Bee reported, “employers with 25 or fewer employees will be required to pay a minimum of $11 an hour, while employers who have 26 or more employees must pay $12 an hour.”

But warning signs already indicate that the policy isn’t working.

Despite huge growth in California’s restaurant industry, some businesses—largely in the full-service category of restaurants—have been hit hard.

Restaurant Business Online reported: “Nearly 1 out of 10 in areas with a recently increased minimum wage have closed an operation since the cost hike, and 71 percent have attempted to pass along the rise to customers by raising menu prices, according to new research.”

It’s not just businesses that have been harmed. The rapidly increased minimum wage has a negative impact on the job market, leading to employment for fewer people, according to the findings of the University of California, Riverside study:

The study’s authors concluded that this depressing effect on job growth will accelerate as the minimum wage is increased to $15.

For those currently employed—those who presumably benefit most from the law—earnings increases are underwhelming.

“One explanation for a relatively small increase in wages is that lower-paid workers end up working fewer hours as a result of the higher minimum wage, thus offsetting the increase in their hourly rate,” the study says.

The conclusions of this study mirror others that have found that increased minimum wages actually harm lower-income workers.

A notable 2017 study in Seattle, conducted by researchers at the University of Washington, found that a “wage increase to $13 reduced hours worked in low-wage jobs by around 9 percent, while hourly wages in such jobs increased by around 3 percent.”

“Consequently,” that study added, “total payroll fell for such jobs, implying that the minimum wage ordinance lowered low-wage employees’ earnings by an average of $125 per month in 2016.”

What’s clear from the findings of the Riverside study and others is that the movement to dramatically increase the minimum wage is a false panacea. The massive boon promised to workers hasn’t materialized, and for many the mandatory wage hike has been a barrier to employment.

Boom times in the Trump economy have “masked” the issues with the minimum wage, according to researchers, and job growth could have been much better without it.

What’s clear is that minimum wage laws don’t come without their negative side effects, even in good times.

These effects may become more pronounced as automation technology puts pressure on workers in various industries.

And that pressure certainly exists, for example, in the restaurant industry, which is particularly affected by minimum wage laws.

Innovations like kiosk ordering are allowing businesses to avoid labor costs. The pressure to replace jobs with machines will only increase as the minimum wage is driven to an artificially high number.

The truth is that the real minimum wage is nothing. This is what people get if they can’t find work.

The result ends up being a turn to welfare, a drain on society and the individual, which can never replace the benefit of a job.

A government policy meant to help lower-income workers may, in fact, be the bar that makes their employment, and advancement, unlikely or impossible.

Certainly, there are many vexing economic issues to tackle in our future, but it does no good to pursue seemingly idealistic policies that act as an impediment to economic advancement.

As usual, California is ahead of the curve in finding ways to tarnish what is golden. Perhaps that’s why so many middle-class Americans are leaving the wealthiest state in the union for greener pastures.