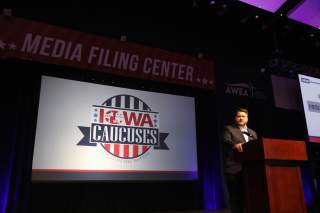 The Iowa Democratic Party’s caucus woes continued Wednesday, when the party made a “minor correction” to an update of its results that inaccurately showed 2020 Democratic presidential candidate Pete Buttigieg increasing his lead over Vermont Sen. Bernie Sanders.

The results have already been delayed because of a technical glitch in a phone app that caucus officials were supposed to use to report results to Iowa Democratic Party (IDP) headquarters Monday.

On Tuesday, IDP released 62% of precinct results, showing that Buttigieg maintained a lead in delegate vote share over Sanders. The former South Bend, Indiana, mayor’s lead grew slightly Wednesday, after IDP had released the results of 75% of precincts.

There will be a minor correction to the last batch of results and we will be pushing an update momentarily.

IDP identified an error in an update released later Wednesday.

Those results, which brought the total precincts reporting to 85%, showed that Buttigieg’s lead grew by another 0.7 percentage points. But IDP appeared to have inaccurately attributed delegates to businessman Tom Steyer and former Massachusetts Gov. Deval Patrick.

Massachusetts Sen. Elizabeth Warren and former Vice President Joe Biden are third and fourth, with 18.3% and 15.9% of delegate share, respectively.