The Missed Opportunity of The Woman King 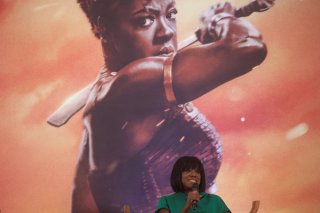 As the old quip goes, it is somewhat wrong to say tomatoes are vegetables, but it is very wrong to say that they are bicycles. The stunning and brave Dahomey “amazons” recently made famous by the tedious new film “The Woman King,” had one major conflict in recorded reality, with the French, where tens of thousands of them charged the French lines in hand-to-hand combat and were mowed down by superior tech and tactics. After four hours of fighting, despite attrition in French supplies and ammunitions, with around 2,000 of their best dead, they withdrew. The French lost around sixteen men.

This is not just trivia for a pub quiz. This is a historical fact that you won’t find in the film, which is at best an alternate reality, even when it claims to be based on “true events.” That’s stretching it. There was a kingdom of Dahomey. They had a female premodern warrior force and a king named Ghezo. That’s about it. The film depicts a kingdom, led by an ambivalent but good king who is worried about going to war to stop slavery by those in cahoots with the Portuguese slave traders. Ultimately, the amazons take matters in their own hands. You can guess the rest. The reality was, of course, different. Dahomey was a notorious slave trading kingdom itself, so much so that other African kingdoms actively cooperated with the Europeans.

Of course plenty of historical films romanticise their terrifyingly violent heroes, as anybody who has seen Gladiator or 300 will attest. Such is the nature of storytelling. The problem for The Woman King, though, is that Dahomey wasn’t just a violent society; it was a violent slave-trading society. Hence the tsunami of controversy. Although we’re always been told that slavery is a terribly difficult and complicated subject, the history behind all this is actually pretty straightforward. Slave-trading was enormously important, if not essential, to the kingdom of Dahomey… Dahomey’s expansion was exactly contemporary with the heyday of the Atlantic slave trade. In particular, Dahomey seized and controlled the port of Ouidah, one of the most important hubs in the entire network. From here, hundreds of thousands, perhaps even a million African captives were forcibly embarked on ships for the New World.

This points to something about modern historical narratives, especially about colonialism, slavery, or women’s rights. The real story of Dahomey, and colonialism, is enormously more interesting, complicated, and interweaving than whatever binary tedium concocted by modern narrative weavers, who all sound like mediocre HR managers who graduated from Rutgers women’s studies department with a minor in psychology. Characters are bland, the conniving hyper-elitists versus the combined might of the twee and the righteous. It’s the same in the Netflix series “Barbarians.” It’s the same in “The Woman King,” which is again qualitatively no different than the “Rings of Power.” They are all fictional, they are all propaganda, and they are not particularly smart or interesting.  A woman-led force that is equally horrific, ruthless, and brutal as the Spanish conquistadors is an interesting story. A woman-led force that is full of compassionate saints who are all also wise and warriorlike as Pallas Athena, is boring and repetitive Hollywood fiction.

The reality is, of course, different. Colonialism and slavery are not binary issues, with the Europeans always being the implied baddies. The Ottomans had Christian slaves long after the American civil war. There were more Irish and Circassian slaves in the North African coastline than the Europeans ever had in the new world. In fact, Lord Pellew bombarded the Algerians Deys and told his fleet to negotiate with the slavers with “shots, and nothing but shots.” Likewise, there were slaves in pre-modern Latin America, most of Africa, and of course, in the far east. The idea that Atlantic slavery was uniquely evil compared to the other parts of the globe is quite simply not true, but to say otherwise in contemporary circles would destroy the two most cherished myths of post-colonial scholars: 1) that European high civilization from the late sixteenth to early twentieth century was the cause of most current global problems, and 2) that anti-slavery movements were almost always led by the subalterns without any European help.

The curious thing about a true neutral history of colonialism is what is often unsaid, that it was a long-term and often collaborative process, where the local agents wanted the colonial powers to come and save them from their local rulers. Spain had support from local kingdoms and tribes against the cannibalistic and human-sacrificing Aztecs. It was the British after the Napoleonic wars, with unchecked supremacy of the Royal Navy, that dedicated a massive portion of the annual GDP to eradicating slavery and piracy from the high seas, as well as in pursuit of discovery and science, mapping charts of oceans and funding expeditions in the poles. As Helen Andrews wrote, when Englishmen reached Mashonaland, they encountered a civilization which had no “developed currency, written language, irrigation, beasts of burden, the plow, or the wheel.” Dahomey was also a typical African pre-modern power, as English historian Stanley Alpern wrote, where the king practically had divine powers, a society “dedicated to warfare and slave-raiding … with the king controlling and regimenting practically every aspect of social life.”

Even in high civilizations (to use GK Chesterton’s terminology of a polity that had established hierarchy and civilized norms) like medieval India, there was no modern Westphalian conception of a nation-state, with any modern secular and mixed-ethnic army, parliamentary democracy, or right to property and rule of law. There were local powers and intelligentsia, who opposed rival local rulers and often sided with the British. It was Western-educated Bengali intellectuals who first appealed to the British to open science colleges, after the 1857 mutiny which they feared was an attempted return to the dark feudal days of widow burning, religious taxation, and thuggees.

The history of the formation of the Raj, for example, isn’t the tale of one-sided victimhood that either the Nehruvian socialists or the Hindu nationalists write, but was instead a major balance of power game between various poles such as the Mughals, the Nawabs, Nizams, Marathas, Sikhs, Rajputs, and the Bengalis, who all sided at various times with the British and French. To use Robert Tombs’ words, it was a British-Indian empire. Even after the establishment of British suzerainty, the administration was primarily in the hand of the Indians, who formed the bulk of local rulers, princes, magistrates, teachers, businessmen, doctors, lawyers, and high civil servants. It was mired in a century and half of collaborative effort, a tale of rediscovery of lost art schools, architecture, industry, mechanization, archaeology, anthropology, and science often under British patronage and guidance but done mostly by Indian scholars, a proud tale which is far more interesting than the ignorant black and white history that forms the basis of the current official narratives of decolonization.

Likewise, in Africa, there were high civilizations where such collaborative efforts took place, most prominently in Ethiopia and Egypt. Hundreds and thousands of Europeans settled in these places; wed, bred, and made these lands their home; and contributed to the intellectual and financial development, the fruits of which are still visible from roads to rails, industries, and institutions. By the 1880s, late imperial Europe was borderless, meritocratic, hierarchical and—at least at the elite level—interracial, to a degree modern liberals can only dream to achieve.

Of course, every high civilization decays by forgetting obvious things, as Chesterton wrote. The obvious counterargument is that “The Woman King” is just a risible movie, and that art is always fictionalized according to the currents of time. But history is not just a domain of narratives, even when it is Hollywood history. The primary task of pop-history is to aspire for some form of elevated neutrality and realism, instead of pure Reddit-lite revisionism. Neutral and detached history is attractive, in all its grey glory. But that both confuses simpletons and defeats the purpose of ideologues, who are not here to celebrate but to denigrate. Ultimately, such bland and homogenized mediocrity is a disservice to society and an insult to intelligence. All art is, after all, quite useless.

Sumantra Maitra is a national security fellow at the Center for the National Interest and an elected Associate Fellow at the Royal Historical Society. He can be reached on Twitter at @MrMaitra.