Missile Plane: How the C-17 Cargo Plane Could Be Modified to Carry Deadly Weapons 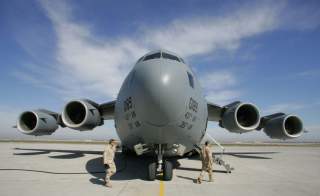 Key point: Washington wants to find new ways to fight future wars. One would be to take cargo planes and make them capable of causing great damage.

The U.S. Air Force is refining its concept for an “arsenal plane” that could haul huge numbers of munitions into combat. Now cargo planes could be in the mix alongside bombers.

The Air Force in 2016 first discussed the concept. The “multi-engine” arsenal plane would carry large numbers of “network-enabled, semi-autonomous weapons” and fire them at targets identified by other, more survivable planes such as bombers and stealth fighters, the Air Force explained in a 2016 concept video.

The Pentagon’s secretive Strategic Capabilities Office originated the arsenal-plane concept. The idea “takes one of our oldest aircraft platform[s] and turns it into a flying launchpad for all sorts of different conventional payloads,” Ash Carter, then the defense secretary, said in 2016. “In practice, the arsenal plane will function as a very large airborne magazine, [and] network to fifth-generation aircraft that act as forward sensor and targeting nodes.”

In a parallel effort, the Pentagon also is developing new, smaller missiles that could increase, severalfold, the weapons loadout of a fighter or arsenal plane.

Many observers assumed the Air Force intended to modify some of its 1960s-vintage B-52 bombers to function as the flying arsenals. The eight-engine B-52 matches the service’s description of an “old,” “multi-engine” aircraft.

The bomber lacks stealth qualities. Even before the advent of the arsenal-plane concept, the Air Force planned for the B-52, during high-end warfare, to perform a supporting role firing long-range munitions. The arsenal-plane idea merely extends the B-52’s existing operating concept and could require minimal modifications to the bomber’s sensors, communications, hardpoints and bomb bay.

“You have to go look at those options, if you believe you’ll have access to airlift assets to go do that in a time of crisis,” Ray said. “I’m not mentally there, I don’t see how that comes together.”

“At the end of the day, there’s a little bit of learning going on,” Ray added. “It’s an easy thing to draw, a tougher thing to do.”

But a cargo plane such as a C-17 could require extensive modification before it could launch weapons. And as vulnerable as a lumbering B-52 is, a C-17 with its relative dearth of electronic countermeasures is even more vulnerable.

“C-17s will likely be in very high demand during the opening stages of a major conflict accomplishing their primary missions,” Mark Gunzinger, an analyst with the Virginia-based Mitchell Institute for Aerospace Studies, told Cohen. “It wouldn’t make sense to allocate them for strikes instead of using them to deploy forces into a theatre of operations.

Uncertainty aside, there’s a cold logic in the Air Force’s drive to acquire an arsenal plane. To preserve their clean, radar-dodging lines, the service’s F-22 and F-35 stealth fighters typically carry their weapons in small internal bays.

“This is a little unusual and something (almost) entirely new,” Brian Laslie, author of The Air Force Way of War, told The Daily Beast shortly after the Air Force first announced the arsenal-plane concept. “But with too few fighters carrying too few weapons—and rapidly-arming foes—the Pentagon seems willing to risk something unusual and new: slow, decidedly non-stealthy heavy bombers backing up speedy stealthy fighters a fraction their size.”