Missiles, Fighter Jets And Much More: How China Just Showed Off Its Military Muscles 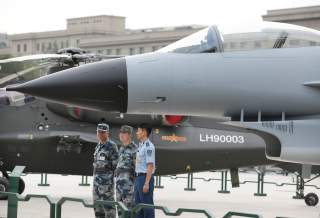 TAIPEI – Think tanks normally do not put the fear of God in you, but a new report from the London-based International Institute of Strategic Studies (IISS) does the job.

The report, “AirShow China 2018: ‘China Dream,’ Air Power and Deterrence,” demonstrates that China’s defense modernization and industrial efforts are “underscoring the role the sector has in President Xi Jinping’s broader nationalist vision of turning China into a great power.”

Officially known as the China International Aviation & Aerospace Exhibition, held in the southeastern city of Zhuhai in early November, it is now the biggest military airshow in the region, bar none.

Authored by Meia Nouwens, an IISS policy wonk, and Douglas Barrie, the IISS Senior Fellow for Military Aerospace, the report indicates that China is pushing the envelope on all fronts, no pun intended.

Douglas is not your ordinary think tanker hiding behind a keyboard. The boots-on-ground approach, not only as a Zhuhai veteran, but as a former military journalist, makes the report required reading. Douglas has jet fuel under his fingernails and puts to shame any of the reports circulated by the media covering Zhuhai, including Jane’s and Shephard.

Though the intricate details of China’s new weapon systems were revealed in the report, the authors also demonstrated that China was not just selling toys for boys. It was also selling a “vision” and “delivered explicit and implicit political messaging regarding the role China’s ever more capable defense aerospace sector is playing in delivering President Xi Jinping’s dream: Beijing re-asserting its ‘rightful’ position in the world order.”

Details of a new Block III upgrade of the Pakistan JF-17 fighter aircraft, co-developed with China (FC-1), include the possibility that Pakistan is considering non-Chinese weapons and systems, including the South African A-Darter short-range air-to-air missile, as a successor to the Chinese PL-5, and the Denel-built Raptor II rocket-boosted glide bomb. Despite competition from South Africa, China appears still in the Block III competition for the active electronically scanned radar, including the new KLJ-7A.

The message from China for the international audience attending the show was twofold, said the report. For the international defense export market, it demonstrated that China is a source of “ever more capable defense systems,” and for peer competitors, it was “intended to portray a strong and confident China, capable, if needs be, of fighting—and winning—wars.”

Image: Soldier stand next to a J-10 fighter jet during an exhibition for the 90th anniversary of the founding of the People's Liberation Army (PLA) outside Military Museum of the Chinese People's Revolution in Beijing, China July 28, 2017. REUTERS/Jason Lee​.