From Missiles to Oil, These Are Iran's Most Lethal Weapons 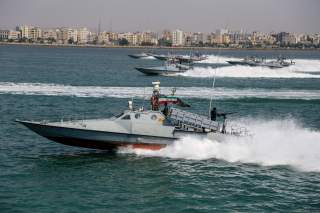 Key point: Iran still has many tools to push back against U.S. national security interests.

The recent agreement between Iran and the P5+1 has, presumably, tabled the question of Iranian nuclear weapons for the next ten years, and perhaps longer.

However, Iran retains a set of lethal tools for pursuing its interests in the Middle East.  Iran’s regional presence has always amounted to more than the nuclear weapon threat; before the Revolution, Iran played a central role in the politics of the region. After the Revolution it continued to play this role, only in far more disruptive fashion.

Here are five lethal “tools,” arrayed across the spectrum of strategic violence and influence, that Tehran can use to protect its position and further its ends:

Iran has struggled to keep its conventional military forces out of the various wars that have embroiled the region since the early part of last decade.  This hardly means, however, that Iran has remained aloof from these conflicts.  Rather, Iran has sponsored irregular warfare, through training, supply of weapons, and supply of cash, in Iraq, Syria, Afghanistan, and elsewhere. The Iranian Revolutionary Guard generally acts as the vehicle for this support.

Iran has come closest to direct, formal military intervention in Syria, where it has spent aggressively to keep the Assad regime in power and to restrict the spread of ISIS (a Quds Force commander was killed in Damascus).  The Iranians have also intervened in Iraqi political and military affairs since the U.S. invasion, usually through the sponsorship of Shia militias.  The relevance of Iranian support for other regional actors, including the Houthi rebels in Yemen, is in dispute, but there’s little question that Iran has displayed a willingness to dip into regional conflicts with training and weapons.

Arguably, the newfound tolerance of Saudi diplomats for the state of Israel represents the final straw in the abandonment of Palestinian liberation by the Sunni states of the Middle East.  For the last decade, at least, Iran has filled that void through its support of Hezbollah and Hamas, as well as other Palestinian organizations.  Support for these organizations earns Tehran diplomatic and ideological cred in the region, while also offering to offset (however mildly) Israel’s overwhelming conventional military dominance.

There’s considerable debate over how far the leaders of Hamas, Hezbollah, and other Palestinian groups are willing to go on Iran’s behalf; the Israeli Defense Force can reach out and touch these groups far more effectively than it can hurt Iran.  However, these organizations’ existence and continued strength provides a constant source of anxiety for the Israeli government.

Iran’s ballistic missile force remains its most serious conventional military threat in the region.  The ballistic missiles, capable of precision strikes against political, military, and economic installations across the Gulf, pose a real threat of serious damage to the regional order. In a sense, the ballistic missiles fulfill the deterrent purpose of the nuclear program, only in far more credible fashion.

Ballistic missile strikes probably could not destroy the oil production and transportation infrastructure of the Gulf, although improvements in accuracy over the last few years have undoubtedly increased their lethality. Missile strikes would undoubtedly invite significant retaliation from Saudi Arabia and its allies, which would pit the Saudi Air Force against the Iranian air defense system.  But the missiles could undoubtedly cause chaos and trouble, which makes them an effective back-pocket deterrent.

The deal with the P5+1 will open up investment in Iran’s oil and natural gas industries, investment that will help rebuild the country’s aging and decrepit energy infrastructure.  Much of the funds for investment will come from foreign companies. Freed from concern about sanctions (and legal reprisals from the U.S. government), these firms will form cooperative agreements with the Iranian government.

Obviously, the ability to conduct agreements with international firms for energy sector reconstruction doesn’t rise to the level of lethality of ballistic missiles or Quds Force fighters (the long-term environmental effects of fossil fuel production notwithstanding).  Nevertheless, such agreements fulfill two of Tehran’s foreign policy goals; first, providing a financial foundation for the reconstruction of Iranian conventional and unconventional military capabilities, and second, making foreign firms (and hence foreign governments) dependent on the long-term integration of Iran into international society.  Consequently, the reconstruction of the energy industry in Iran has economic and political components, both with relevant military implications.

The nuclear deal relieves some of the sanctions on Iran, and also frees up billions of dollars in Iranian funds abroad.  Even the deal’s backers in the West acknowledge that Iran may use some of these funds to continue its support for “subversive” organizations across the region. These groups have, at most, the potential to destabilize local governments, producing civil conflict and even war.  At the least, they produce paranoia and distraction.

The Gulf States in particular have decided to find an Iranian boogeyman behind every domestic opposition group. The Afghan government has also thrown accusations at Iran, often of questionable provenance. However, while blaming unrest on foreign actors is an ancient tactic of authoritarian and unstable governments, this hardly means that Iran is innocent of supporting subversive activity.  As with the irregular warfare programs, the mechanism for backing resistance groups is normally the IRGC, and specifically the Quds force.

The Iran deal may (or may not) have created a new, more tenable status quo with respect to Iran’s nuclear program.  It has not, however, eliminated the strategic tensions that remain central to the region.  Iran, the Gulf states, and Israel (not to mention the United States) disagree on key questions of how to organize politics in the Middle East, and all will likely continue to use force to press their cases. Tehran will continue to use the tools that it has developed in thirty-five years of isolation, often with lethal effect.

Robert Farley is an assistant professor at the Patterson School of Diplomacy and International Commerce. His work includes military doctrine, national security, and maritime affairs. He blogs at Lawyers, Guns and Money, Information Dissemination and The Diplomat. Follow him on Twitter: @drfarls. This article was first published several years ago and is being republished due to reader interest.