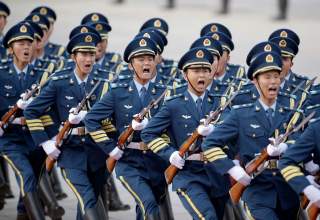 As the global chessboard shifts, China is planning its next moves in the Middle East. The consensus holds that Beijing will look to grow its robust economic relationship with the region while avoiding political and military engagement, though that strategy may prove unworkable. The Middle East’s complexities, some argue, render it impossible to keep economics and politics separate. In coming years, arms sales are one avenue for the Chinese to deepen their geopolitical investment in the region.

The People’s Republic of China (PRC) sold almost $16 billion in arms worldwide between 2008 and 2018, making it the fifth largest supplier. Top among its regional export markets is the Middle East, which, according to the Pentagon’s annual report on Chinese military power, imported over $10 billion in Chinese weapons between 2013 and 2017. Chinese arms are already part of the Middle East’s military landscape.

All this is not to deny Washington’s preeminence in the regional arms market. Some 52 percent of all U.S. arms sales between 2014 and 2018 went to Middle Eastern countries. The region is home to several nations that maintain large military budgets with negligible or nonexistent indigenous defense industries, making them dependent on foreign suppliers. This is especially true in the case of Saudi Arabia and the United Arab Emirates, which last year imported $3.35 billion and $799 million worth of U.S. arms, respectively. Contrast the former figure with the $20 million Riyadh bought from Beijing in 2017.

Despite the Middle East’s appetite for U.S. arms, circumstances could change. Beijing has recently grown more aggressive in leveraging its economic influence for political ends. Take its success in getting fifty-four member states at the United Nations (Egypt notably among them) to endorse the PRC’s detention of Uighur Muslims. Beijing could use its Middle East trading relationship—now estimated at an imposing $300 billion annually—as a calling card in a bid to have those countries buy weapons.

Selling more military equipment to the Middle East would advance China’s regional and global aims. As additional Chinese arms flow in, it’s not hard to imagine military cooperation deepening in other areas. Through the Belt and Road Initiative (BRI), the PRC has demonstrable interests in controlling shipping lanes and land routes throughout Eurasia. Further arms exports to Middle East could lay the groundwork for naval bases in the Gulf and the Mediterranean where countries have signed on to the BRI. The PRC already has pacts to operate maritime installations in Djibouti and Cambodia (and potentially in Sri Lanka), and may look to build more on the territory of its Middle Eastern clients. Arms sales could be a harbinger of stronger military engagement.

American concerns grow. On October 31, Assistant Secretary of State for Political-Military Affairs R. Clarke Cooper cautioned foreign diplomats against buying deficient arms from China (as well as Russia). Concealed in his dismissing Chinese weapons as substandard is anxiety about their proliferation. For all the talk of U.S. withdrawal from the Middle East, Washington does not want the region to depend more and more on Chinese weaponry. Cooper’s warning is a sign that the United States sees China as a vexing competitor when it comes to arms deals in the Middle East and beyond.

Expect more advanced Chinese hardware to make its way into the region soon. A case in point is Iran, which will purchase fighters and tanks from China and Russia next year. Saudi Arabia has also reportedly purchased advanced Chinese ballistic missile technology. Elsewhere, advances in shipbuilding and hypersonic missiles could woo foreign buyers as the PRC’s military modernization marches on. The more Chinese weapons end up in the hands of Middle Eastern states, the more the PRC’s political influence there grows.

This is not lost on Washington, which precedent suggests will not stand idly by. Consider its history of responding to objectionable foreign arms sales within the Middle East. Just this summer, Turkey’s purchase of Russian S-400 missiles resulted in its expulsion from the F-35 program. An example involving China came in 2005, when the United States successfully pressured Israel to scrap UAV sales to the PRC. A far likelier scenario this time around is for Beijing to be the seller, not the buyer, across the region.

As was the case during the Cold War, when the United States vied with the Soviet Union for regional dominance, arms sales could very well be a growing point of contention between Washington and Beijing in the Middle East. Preparing for this competition should be a priority of U.S. policy toward the region going forward.

Daniel J. Samet is Program Assistant for Middle East Programs at the Atlantic Council. The views here are his own.