Mission Possible: This Trio of Destroyers Will Change Sea Warfare 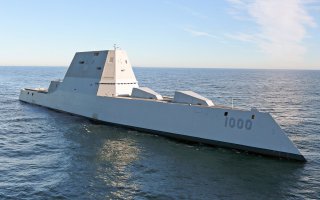 The construction of a second Zumwalt-class stealth destroyer shows that the Navy is close to completing its three-ship fleet of next-generation warships.

Several years ago, the Navy made a specific decision to evolve and expand the mission scope for its Zumwalt-class from a ship primarily intended for more littoral, land-attack missions to include deep-water great-power warfare. The shift happened several years ago as the military service sought to transition its focus from counterinsurgency to preparing for a great-power war.

There are several ways that the Zumwalt-class could potentially support missions in large-scale warfare. A series of technological innovations woven into the ship’s design and construction enable this mission support. For instance, the ship has an electric drive propelled by a built-in integrated power system (IPS) harnessing electric power from four seventy-eight-megawatt generators able to support an expanding sphere of ship missions. For example, the IPS enables the ship to operate with much greater degrees of exportable power. Drawing upon this, the Navy has been integrating laser weapons onto stealthy ships. Lasers can be scaled to either disable a target or destroy and incinerate it—depending upon the demands of a particular mission. Lasers could be used as interceptor weapons. This would create a layered ship defense system able to help track and disable, burn or fully shoot down incoming enemy ballistic missiles or anti-ship missiles traveling closer to the surface. Additionally, the weapons can be used to counter-drone operations or attacks against enemy helicopters or even lower-flying fighter jets.

The Zumwalt was clearly built for warfare. It has over-the-horizon vertical launch systems capable of firing a wide range of enemy interceptors and offensive weapons such as the SM-6, SM-3 and Tomahawk cruise missile. Unlike standard destroyers, which have the VLS stacked or lined up next to each other along a defined portion of the ship, the Zumwalt-class is engineered with VLS dispersed around the periphery or outer boundary of the ship deck. This will prevent too much consolidation. Also, it will enable the ship to keep firing weapons should a small number of VLS be destroyed by an incoming attack. Putting the VLS in close proximity to each other increases the likelihood that the ship will lose firepower and functionality should a large number of VLS be destroyed in a single shot. If all the VLS were bunched up together, as is the case for DDG-51 Arleigh Burke-class destroyers, then one targeted strike could render them ineffective.