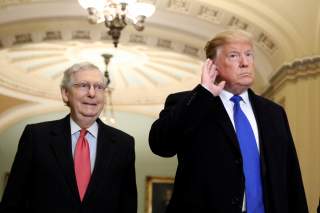 In the wake of another series of mass shootings, President Donald Trump has repeatedly waffled and wavered on whether to take any action to stop the epidemic of gun violence in America. NRA-backed Senate Majority Leader Mitch McConnell (R-KY), who has long opposed any such progress, said Tuesday he will wait and see if Trump actually means any of the things he said in public before scheduling any Senate votes.

After mass shootings in El Paso, Texas; Dayton, Ohio; and Gilroy, California, left dozens of people dead, Trump — who benefited from more than $29 million in NRA spending in his 2016 race — initially said he wanted to ensure that all gun purchases required background checks.

“Frankly, we need intelligent background checks,” Trump told reporters in early August. “I spoke to Mitch McConnell yesterday…. He is totally on board,” the president claimed.

But after speaking with NRA officials, Trump changed his tune. Later in August, he reminded the nation that “we already have a lot of background checks.”

In an interview with conservative radio host Hugh Hewitt on Tuesday — days after another mass shooting in Odessa, Texas, left at least seven people dead — McConnell made it clear he doesn’t believe Trump’s public statements mean much of anything. McConnell said he would wait and see where the president landed before committing to anything.

The self-described Senate “grim reaper” typically blocks all legislation from even coming up for a vote, and said that a “discussion about what to do on the gun issue in the wake of these horrendous shootings” is ongoing.

“I said several weeks ago that if the president took a position on the bill so that we knew we would actually be making a law and not just having serial votes, I’d be happy to put it on the floor,” McConnell said. “The administration is in the process of studying what they’re prepared to support, if anything, and I expect to get an answer to that this week. If the president is in favor of a number of things he has discussed openly and publicly and I know we will pass it and it’ll become law, I’ll put it on the floor.”

McConnell once objected to presidents who do not actually support the things they say they support in public. In 1993, when giving his party’s response to President Bill Clinton’s weekly radio address, McConnell — then in his second six-year Senate term — complained, “During the presidential campaign, Bill Clinton promised to reinvent government. Instead, Clinton has spent the last three months reinventing his campaign promises.”

Josh Israel has been senior investigative reporter for ThinkProgress since 2012. Previously, he was a reporter and oversaw money-in-politics reporting at the Center for Public Integrity, was chief researcher for Nick Kotz’s acclaimed 2005 book Judgment Days: Lyndon Baines Johnson, Martin Luther King Jr., and the Laws that Changed America, and was president of the Virginia Partisans Gay & Lesbian Democratic Club. A New England native, Josh received a B.A. in politics from Brandeis University and graduated from the Sorensen Institute for Political Leadership at the University of Virginia, in 2004. He has appeared on cable news and many radio shows across the country.

This story was originally published in ThinkProgress.