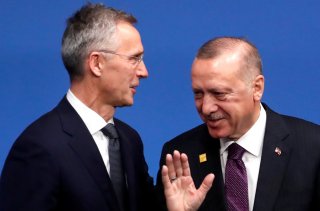 The agenda of the North Atlantic Treaty Organization (NATO) summit next week in Brussels will be dominated by questions of how to transform the Cold War-era alliance of democracies to face twenty-first-century challenges from authoritarian states like Russia and China. The answer lies in first dealing with an authoritarian state within NATO: Turkey.

During his nearly two decades at Turkey’s helm, President Recep Tayyip Erdoğan persuaded three successive U.S. presidents that he was crucial to achieving U.S. interests in the Middle East. Presidents George W. Bush, Barack Obama, and Donald Trump saw in Erdoğan a partner for, respectively, promoting democracy in the region, repairing strained U.S.-Muslim relations, and shouldering the burden of fighting the Islamic State or perhaps even Iran.

Throughout this period, however, Erdoğan moved Turkey further away from, and often even into direct confrontation with, the United States and NATO. During the course of 2020, for example, Turkey shipped arms to Libya and harassed a French warship trying to enforce a United Nations embargo against doing so; made forceful claims to Greek territorial waters, including intercepting Greek F-16s; and began operationalizing its Russian-bought S-400 missile system that U.S. officials had repeatedly warned was dangerous for NATO forces.

Meanwhile, Erdoğan eroded political liberties and the rule of law at home. Turkey now jails more journalists than any country in the world. Social media is heavily controlled, the judiciary enjoys no independence, and Erdoğan’s political opponents languish in prisons.

Past U.S. administrations largely hoped their silence on such Turkish transgressions, foreign and domestic, would secure Turkish cooperation in other areas. Despite that cooperation never appearing—Ankara never contributed to the promotion of freedom, U.S.-Muslim reconciliation, or fighting U.S. adversaries—Erdoğan is looking to pull off the same trick again.

Erdoğan is now casting Turkey as indispensable for U.S. efforts to counter growing Russian, and even Chinese, influence. Turkey touts its support for forces fighting Russian-backed opponents in Syria, Libya, and Nagorno-Karabakh, as well as recent drone sales to Poland and Ukraine. Ankara has even started arguing to American experts that it could offer an alternative to Russian and Chinese influence in Central Asia, using its ethnic and linguistic ties there.

These Turkish overtures could appear tempting as President Joe Biden travels to Europe, including for a meeting with Erdoğan, with an agenda of, as he recently wrote, “confronting the harmful activities of the governments of China and Russia.”

Yet, Turkey’s own actions belie its claims to be a partner against Russia and China. Ankara has not only bought Russian weapons that undermine NATO’s collective defense but also, just two weeks ago, blocked NATO sanctions and watered down a statement against Moscow-backed Belarus’ “air piracy.” Instead of standing against the genocide of its brethren in China—the Muslim and ethnically Turkic Uighurs—Turkey is deporting Uighur refugees back to China.

Still, it is worth testing whether Turkey’s offer of cooperation is sincere or self-serving. The NATO summit, and Biden’s meeting with Erdoğan, should present Turkey with a serious, and consequential, choice.

First, Biden should coordinate a common approach to Turkey with other NATO members. Both the S-400 and Turkish aggression in the Eastern Mediterranean threaten NATO’s unity and European security, but often European nations are more focused on economic, migration, or human rights issues. If U.S. and other NATO partners’ interests remain overlapping but misaligned, no country is likely to achieve even its second- or third-best outcomes with regards to Turkey.

Biden should make the case that the S-400 issue is a concern, indeed the greatest concern, for the entire alliance. And Washington should be prepared to advance issues beyond its own interests, such as pressuring Turkey over migration issues.

In return, NATO and Biden should offer Turkey cooperation on issues it cares about. For example, if Turkey relinquishes control of the S-400 missiles, NATO countries could offer to work with Ankara on supporting Ukraine, peacefully resolving the conflicts in the South Caucasus, and minimizing Russia’s role in Libya and Syria. Similarly, if Turkey is willing to de-escalate tensions in the Eastern Mediterranean, Washington could facilitate a dialogue between Turkey, Israel, and Egypt on marketing their gas to Europe.

Simultaneously, Erdoğan should understand that the alternative to cooperation with NATO will be alienating the entire bloc.

To make such a consequence more real for Ankara, NATO should prepare for the eventuality that Turkey—or other members—thwart the alliances’ goals. This requires developing mechanisms for censoring and, if necessary, ousting members that fail to live up to NATO’s democratic principles or weaken its collective security. Simultaneously, NATO should strengthen its partnership with other states, such as Cyprus and Israel.

NATO cannot successfully confront external threats with autocratic spoilers inside the alliance. Erdoğan should be presented with a clear choice between cooperation or relegation.

Blaise Misztal is Vice President for Policy at the Jewish Institute for National Security of America. (JINSA).