More Immigration Is Inevitable, But Overcoming Its Challenges Isn’t 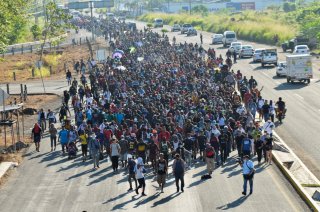 With the Census Bureau reporting a significant dip in total U.S. fertility rates—and a correspondingly lower population growth—in the past decade, the specter of demographic and economic “decline” seems to be preoccupying many commentators. Two groups have dominated the debate. First, prophets of doom who have legitimate concerns about increasing old-age dependency ratios (the ratio of the population sixty-five years and over to the population aged fifteen to sixty-four, multiplied by a hundred) but who are also worried about the size of the GDP—rather than the much more meaningful GDP per capita—and apparently equate population size with the ability to project global power. The second group is most pro-immigration advocates and activists who see in the data an opportunity for much larger immigration intakes. As the positions of the two groups dovetail nicely, the political argument for much more immigration appears to be irresistible.

And it may well be. Unsurprisingly, both sides have their usual blinders firmly in place and frequently rely on hyperbole. But are their arguments based on sound analyses? And are they politically viable? As is typically the case with complex matters, the deep divisions about immigration intake (approximately two-thirds of whom are family members), and particularly the manner in which certain immigrants enter (illegally and increasingly by crashing the southern border), the political viability of increasing immigration substantially appears questionable. This political reality will persist at least until we reestablish legality and order at our borders, reform our immigration system to align much better—and more clearly—with our economic needs, and reach out to include the millions of U.S. workers who are not in the labor force. Investing in the education and training of such typically “forgotten” and marginalized potential workers, most of whom are traditional and immigrant-origin minorities and women, and assisting them to find their way into the active workforce, is an imperative not only to maintaining a just society but also to the long-term economic health and stability of the nation. It is also a prerequisite to giving the government the “license” to admit more immigrants without fueling greater divisions and the intolerance that such divisions generate.

Looking at the demography/immigration nexus more closely, the most sensible policy position is that those who worry about the size of the U.S. population first and foremost, need not worry so much. It is perfectly reasonable for policymakers, however, to be thinking harder about how to address persistent lower fertility because of its longer-term effects on faster aging populations, the fact that fewer people will be contributing to retirement support systems while progressively more will be gaining access to them, and, in the out years, about “negative demographic momentum,” whereby ever smaller numbers of women in child-bearing ages have fewer children—the citizen workers that will keep the economy humming and the broader society healthy.

But while size may matter, there are many things that matter much more. The first tier items include a well-educated workforce that invests in lifelong learning and public policies that encourage them to do so; a private sector that prizes both formal and informal (tacit) skills and experience and rewards workers for continuing to invest in themselves; gradually tweaking social policies to extend working lives, and hence delay the age that formal retirement begins—so that there is less anxiety about worker shortages; and, of course, much better health care systems that create the conditions for extending people’s working and post-retirement lives.

Easy? Not really but these are the types of initiatives that are at the heart of dynamic economies, long-term competitiveness, the liquidity of our retirement system, and healthier lives for older workers and retirees. After all, if most Americans are living longer and healthier lives, working lives must also be extended.

And what about immigration policy? If it were possible to set aside, at least temporarily, the political arguments of the extremists who advocate for far more or far less immigration, there is no escaping the reality that all high-income countries will increase immigration flows in the future. And “traditional” immigration countries, such as the United States, Canada, or Australia, will probably lead the way—as they do already. The policy (and political) questions then become how many and in which legal categories.

The “how many” is devilishly complex to answer. If we are to really fix our immigration system, and the broader issues that ail our country, the answer to that question is not a single number: it is rather a “target” that responds to the needs of the economy, addresses the reasonable expectations of U.S. citizens and green card holders to reunify with their closest relatives, and is broadly consistent with our humanitarian obligations.

Among these three classic migration streams, the one that appears most straightforward is the economic/labor market one. Yet, responding to the needs of the economy is not as clear-cut as it may seem. Greater openings to skilled and highly skilled and talented immigrants is a no-brainer. And few can disagree with such policies as long as employers play by the rules (in terms of wages, working conditions, appropriate advancement opportunities, minimizing the displacement of local workers, or “preferring” foreign workers over domestic ones) and robust training, education, and job placement opportunities for all workers are in place. Yet the understandable bias toward the high-end of the skills’ continuum will not be enough to address labor market realities, which range from skills and geographic mismatches to the imperative of addressing the unmet labor needs in several areas along the continuum of skills. Among them are many middle-skills (think of the health and elderly care sectors) and sectors that have long been abandoned by domestic workers (think of labor-intensive and perishable crops agriculture, herding or the dairy sector, and personal services of many types, among others).

But even these realities are contested terrain for many—which makes the near-consensus about the importance of greater openness to such workers, melt away the closer one gets to the bottom third of the labor market, where tenure is more tenuous, wages lower, working conditions more difficult, even dangerous, and less protected—in law (the non-applicability of the Fair Labor Standards Act in agriculture) and in fact (when it comes to the enforcement of applicable labor laws)—and the power disparity between worker and employer is most pronounced. These are issues that must be addressed, as is the balance between permanent immigration and properly and fairly administered temporary work visas.

None of this is easy. But at the end of the day, the essence of successful leadership is about demonstrating both courage and wisdom and thus creating political space for doing the difficult things that must be done. If leaders are not willing to make tough choices that hew closer to the national interest and resist the loudest voices at the extremes of both parties, they should make room for those who will.

Demetrios G. Papademetriou is Distinguished Transatlantic Fellow, co-founder, and President Emeritus of the Migration Policy Institute, an independent, non-partisan think tank in Washington, DC dedicated to analysis of the movement of people worldwide. MPI provides analysis, development and evaluation of migration and refugee policies at local, national, and international levels.