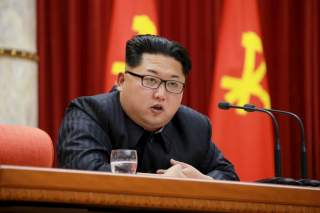 The U.S.-North Korea dynamic is returning to a potentially confrontational phase. Following an end-of-year party plenary meeting, North Korean Leader Kim Jong Un announced his country will no longer abide by its self-imposed moratorium on nuclear and intercontinental ballistic missile (ICBM) testing. Kim cited the continued U.S. imposition of unilateral sanctions on the North and sale of advanced weapons to South Korea as the cause, as well as U.S.-South Korea military exercises, which he said have been held in violation of personal promises from U.S. President Donald Trump.

In response to this alleged U.S. intransigence, Kim warned that the world "will witness a new strategic weapon" in the near future, signaling a potential long-range missile or even nuclear test. An ostensibly civilian satellite launch that showcases North Korea's ICBM-related technology is also possible. In his announcement, Kim acknowledged that U.S.-led international sanctions have restrained his country's development, emphasizing the need to increase North Korean economic self-reliance. But in retaliation, the leader insisted that his country would not sell its "dignity" and would instead resort to "shocking actual action."

With some manner of a North Korean test in the cards, Pyongyang will now carefully calculate what form such tests will take and when it will carry them out. From North Korea's perspective, a return to long-range missile or nuclear tests still carries some risk. A high-profile missile test failure, for example, would erode the credibility of its claimed nuclear deterrent. And any test could provoke a U.S. military response, although Washington would hesitate to do so for fear of triggering a disastrous conflict.

That said, Kim's announcement does not necessarily portend a return to the escalatory U.S.-North Korea confrontations of 2017. In fact, his remarks still leave the door open for U.S. outreach. Washington recently said its communication with Pyongyang was still open. Compared with 2017, the U.S.-North Korea dynamic in 2020 will thus likely be less volatile, with fewer risks of major disruptions of supply chains in Northeast Asia. However, the potential for the United States to rapidly get outreach back on track remains limited, given North Korea's demands for significant near-term sanctions relief and changes to the U.S.-South Korea military relationship. Instead, Washington may resort to increasing unilateral sanctions pressure on North Korea or calling for steeper U.N. sanctions. The United States may also even push to upgrade certain military exercises with South Korea in the spring.

What To Watch For

Sanctions will remain the key battleground going forward. In this, Pyongyang's primary objective is regime security and continuity — something that overly provocative tests and open-ended isolation from the global economy would jeopardize. It will first seek to shore up its own economic self-reliance by prioritizing resources for the military and elites to ensure defense and political stability. At the same time, North Korea will look to break down U.S.-led international sanctions through outreach to China and Russia, each key lifelines for, and supporters of, the North at the United Nations.

Overly aggressive moves such as a nuclear test, however, could undermine Chinese and Russian willingness to support the North Korean economy. Instead, Pyongyang will thus likely focus on escalations that fall short of such red lines, while emphasizing the U.S. hard-line approach as responsible for its resumption of long-range missile testing. In its effort to erode the solidarity of U.S. allies, North Korea will also focus on South Korea by stressing Washington's role in spoiling the chances for inter-Korean cooperation.

But even if it returns to the negotiating table, North Korea is unlikely to substantively erode its hard-won nuclear program. Given its geographic vulnerability, small size and the nature of its regime, Pyongyang will find it difficult, if not impossible, to fully trust the United States. Pyongyang will also hesitate to erode its defenses to any degree under the looming risk of a new U.S. administration potentially taking power and reversing course in November.

Washington, too, has a long enough track record of outreach to North Korea, and is thus well aware of the pitfalls of upholding a deal with Pyongyang. Trump's unique governing style and personalized outreach to Kim, however, still leave room for the two sides to strike a deal — however imperfect — that sustains outreach and even opens the path to a long-term compromise. But any such compromise would more likely amount to containing the North Korean threat, not to denuclearization.

North Korea Has Ended Its Missile Testing Ban. Now What? is republished with the permission of Stratfor Worldview, a geopolitical intelligence and advisory firm.