More Republicans Are Elected To Congress When Immigration Is Higher 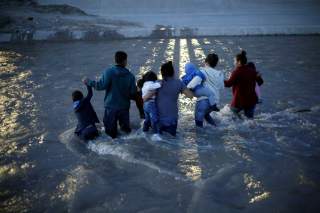 Of all the concerns about immigration, perhaps none is more important to politicians than how immigration affects political control. In particular, many Republicans believe that immigration has clearly boosted the Democratic Party and that higher immigration will obviously doom the GOP. But historically (and recently), congressional Republicans have performed much better during periods when the immigrant share of the population is high. By contrast, Democrats dominated the low immigration periods.

The Republican Party came into existence in 1854, and while it quickly dominated, the Civil War and Reconstruction make its early history anomalous. Looking solely at the period since Reconstruction, Republicans have controlled at least one House of Congress 85 percent of years when the immigrant share of the population was greater than 10 percent, while not controlling either House 83 percent of all other years (Fig. 1). Moreover, they have controlled both houses 59 percent of the high immigration years, compared to just 7 percent of the low immigration years.

Starting this analysis earlier or later hardly changes this relationship between high immigrant shares and GOP success. From 1936 to 1994, when the immigrant population share fell below 10 percent, the GOP won a majority in House elections just twice. It had slightly better success in the Senate. In 1995, the immigrant population would again exceed 10 percent of the population, and the GOP has controlled the House or Senate 92 percent of the years since. Figure 2 shows that regardless of the period considered, Republicans outperformed Democrats when the immigrant share of the population was high.

This relationship is less dramatic for presidential elections, where the parties have basically split White House control regardless of the immigrant population. Republicans have held the White House 61 percent of years with immigrant populations greater than 10 percent, while they held it 47 percent of other years. In other words, the outcomes of presidential elections appear to have little relationship with immigration.

Why Republicans Succeed Despite Immigration

Explaining results in 72 elections with any simple narrative is obviously impossible. But some theories make more sense than others. To begin with, it is true that Democrats have generally benefited from the immigrant vote, so Republicans have had to win even more votes from the native-born population.

It is likely that backlash against immigrants can explain at least some of the GOP’s success. The Republican "revolution," when the GOP took over the House in 1994 for the first time in decades, corresponded with the peak in support for immigration restriction since polling began in the 1950s, and they quickly tried to limit illegal immigration. Though support for restriction quickly dissipated and, by 2019, the public had never been more supportive of immigration, it is possible that the backlash caused a sustained political realignment (particularly in the South).

A related explanation is that high immigration periods have undermined support for key Democratic priorities (at least starting with FDR). Even if they aren’t opposed to foreigners being in the country, people appear less willing to support more expansive welfare benefits if they might benefit foreigners. For this reason, economists Paul Krugman and Vernon Briggs have contended that the New Deal and Great Society entitlement programs of FDR and LBJ might never have happened had immigration remained open. Consistent with this view, one of the first actions that the GOP took when it took over in 1995-96 was to restrict welfare, particularly to immigrants.

Perhaps the best explanation for the GOP’s continued success focuses on the fact that high immigration occurred during periods when Democrats have lacked a key Democratic constituency: unions. Like naturalized citizens, a majority of union members have backed Democrats throughout U.S. history. Beyond members' votes, unions also fundraise, donate, and campaign for Democrats. Since 1895, Republicans have controlled at least one house of Congress 85 percent of years in which the unionization rate was below 13 percent, while they haven’t controlled either house 83 percent of all high unionization rate years.

Unionization spiked thanks to the Wagner Act of 1935, but while Congress never repealed it, economic factors have produced a steady decline in unionization since the 1950s. Unionization rates fell as the foreign-born share of the population rose, and vice versa. But the lost union members made up a much larger portion of voters than the increase in naturalized citizens, leaving Democrats worse off.

This brings up another important consideration in this analysis: the fact that native-born citizens are still 92.2 percent of U.S. voters, meaning that natives will always play a much more important role in the elections than naturalized citizens. The fact that immigrants tend to clusters in certain cities and states further dilutes their effect. Helping Democrats win California, for example, by an even larger margin than they would otherwise does little to influence the overall outcomes.

Not only are immigrant voters a small part of the electoral picture, but immigration policy is only one part of the debates in each campaign. Party success depends on many other factors, policy choices, and strategies, and it would be impossible to consider every change. History need not be destiny, but it is nonetheless evidence for the proposition that Republicans can continue to win elections even during times with many more immigrants in the country.