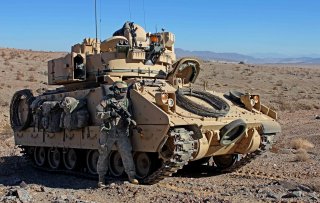 The Army’s emerging Optionally Manned Fighting Vehicle will be armed and armored. It will likely be built with add-on armor kits for heavier protection in major combat conditions; however, it will still be much lighter and faster than a heavily armed tank.

Even if there are new lightweight composites offering advanced protection in some ways comparable to heavier armor, there will certainly be pressing survivability needs for the new vehicle when it comes to confronting Russian or Chinese land attacks.

Therefore, alongside offensive weaponry, it comes as no surprise that the OMFV will also likely include Active Protection Systems (APS), an integrated vehicle protection technology. APS has integrated sensors and advanced computer and fire control technology to detect an approaching rocket-propelled grenade (RPG) or anti-tank guided missile, track it and then fire off an interceptor to knock it out before it hits. The Army has been testing many different APS systems in recent years. That test list includes the IRON FIST, Trophy and the IRON CURTAIN. Each of these technologies is intended to increase survivability for the vehicle and the crew amid incoming enemy fire, and the exact APS configuration for OMFV is likely yet to be determined.

Each defense contractor is likely to offer its own version of integrated APS, including Oshkosh Defense, BAE Systems, General Dynamics and American Rheinmetall. These are the names of the companies that are under contract to develop the vehicle.

The APS concept, in development now for many years, is an integrated process wherein sensors are able to detect incoming enemy fire and alert a fire control computer system onboard the vehicle which then shoots off an interceptor to destroy the approaching threat. The challenge is that soldiers walking near the infantry carrier will need to avoid being in harm’s way so that an intercept explosion does not injure them. Many of these factors have been built into the various vehicle designs.

APS will likely be crucial to the “manned” operational functions of the OMFV as it is being engineered for all kinds of combat, including great-power mechanized force-on-force warfare as well as asymmetrical kinds of counterterrorism or counterinsurgency operations wherein advancing armored forces need to defend against terrorist-fired RPGs. The Army tested APS systems on the Bradley Fighting Vehicle and performed numerous upgrades over the years to equip the vehicle with an enhanced ability to withstand the blasts of improvised explosive devices (IED) and asymmetrical attacks while in Iraq. These upgrades included blast-attenuated seats, a protected ammunition compartment called the “hot box,” reactive armor, electronic warfare jammers and other kinds of countermeasures. It is likely the Lynx and OMFV will be configured with a new generation of advanced protections to include APS, IED protections and, perhaps most of all, massive survivability enhancements to support great power warfare against a technologically superior rival.