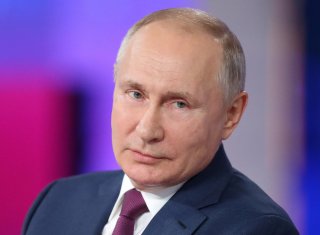 From the invasion of Ukraine to interference in elections across Europe and the United States, the last ten years have seen a dramatic escalation in the Russian Federation’s activity on the international stage. This increased activity has drawn renewed focus on the nature of the current Russian regime and led to a debate among analysts over the role of ideology in Russian grand strategy.

Representing the non-ideological side of the debate, Eugene Rumer and Richard Sokolsky write for the Carnegie Endowment for International Peace that “Russia, like any major power, seeks to expand its influence and weaken the position of its perceived adversaries. But there is little evidence that the Kremlin operates according to some master plan or coherent grand strategy to spread its ideology around the world.”

Yet non-ideological descriptions of Russian grand strategy ignore the way the Kremlin believes the global security environment has changed.

Moscow’s perception of the global security environment has been shaped by the nation’s experiences over the last thirty years. From the wars of independence to the democracy movements in former Soviet states, the Kremlin has seen ideological forces drive political change in its region. Keeping with its tradition, Russia’s security elite have viewed this turmoil through the lens of foreign subversion. This is especially the case with democratizing political movements that have led to so-called “color revolutions.” In Moscow, nearly every democratizing civil resistance movement that has occurred in the last twenty years, including the Euromaidan protests in Ukraine and the entire Arab Spring, is believed to be the result of Western governments using information warfare in the form of democracy promotion and soft power.

Russia’s security services have focused on this phenomenon, developing a methodology they believe the United States uses to overthrow targeted states via color revolutions. There are variations, but in general, Moscow believes the United States starts by using information warfare to promote democracy amongst a population in a targeted state. This value-promotion cultivates a democratic “front” within the target state by shaping a population’s value system to want democracy and then attracting them to American leadership via soft power. The co-opted front is then used to generate “controlled chaos,” such as large-scale protests, which present opportunities to overthrow the targeted regime.

Moscow’s belief that the United States has developed a new extremely powerful weapon with value promotion at its core has come to dominate the Kremlin’s threat perception vis-à-vis the West. According to the Kremlin, generating color revolutions constitutes “New Generation War.” Valery Gerasimov, chief of the General Staff of the Russian Armed Forces argued in 2014 that generating color revolutions is becoming the main means that western countries use to achieve political goals. Retired Russian Col. Gen. Leonid Ivashov said that American soft power is the equivalent of being “attacked with all the means of classical wars—with airstrikes and invasions of large armies.”

Moscow’s belief that a values-based state ideology enables an extremely powerful form of information warfare has created a new set of challenges for the Kremlin. The Russian government hasn’t had a state ideology comparable to Western democracy since the end of the Cold War. Russian president Vladimir Putin himself talked about this challenge during his 2013 Valdai Discussion Club speech, saying “After 1991 there was the illusion that a new national ideology, a development ideology, would simply appear by itself.” Putin continued, “today we need new strategies to preserve our identity,” because a primary focus of modern state competition is “ideological-informational.”

Putin continued his speech by outlining a new state ideology that could solve the problem he described. He defined the ideology as a contrast to western tolerance on social issues like racism, sexism, and gay rights, arguing western democracies were “rejecting their roots,” by accepting multiculturalism and same-sex partnerships, comparing the latter to a belief in Satan. In his annual speech to the Federal Assembly later that year, Putin clarified that Russia’s “values-based approach” international relations meant that Moscow identified itself as a defender of “traditional values.”

Putin’s two 2013 speeches were part of a broader effort to make “traditional values”—defined in ethno-nationalist and homophobic terms—an official ideology of the Russian state. This effort was captured in a 2013 article in the Atlantic subtitled “The Russian president is positioning himself as the world's leading defender of traditional values.” This new state ideology has been enshrined in both Russia’s 2021 and 2015 National Security Strategies, with the latter identifying the preservation and development of traditional Russian values as a long-term national strategic interest.

The addition of traditional values as a state ideology serves Moscow’s domestic and international interests. From a domestic standpoint, an emphasis on traditional values reinforces the strict hierarchies upholding Russian authoritarianism. Internationally, the addition of a values-based state ideology enables the use of value promotion and soft power, allowing Moscow to construct its own color revolution weapon. Social scientists have also found that socially illiberal values like racism translate into “authoritarian personality” traits, meaning the Kremlin could develop its new weapons while undermining the democratic values it is so afraid of.

As previously discussed, the Kremlin believes color revolutions are generated in three steps: value promotion, using value promotion to cultivate a “front,” and using that front to create controlled chaos, usually through protests. Putin’s government has promoted far-right traditional values in myriad ways. This includes promoting LGBTQ+ prejudice and supporting white supremacists across the globe. Perhaps the easiest way to observe Russian value promotion is through the narratives promoted in state media. Julia Davis, who covers the subject for the Daily Beast, writes that the Kremlin uses its state media: “…to attract Western converts with… bigotry—turning Russia into the land of ultimate political incorrectness, the world’s anti-woke capital.”

The promotion of social conservatism then cultivates like-minded groups in the West to serve as a front for Russian interests. After hearing Putin’s 2013 national address to the Federal Assembly, American social conservative Pat Buchanan wrote an article asking, “Is Putin One of Us?” One prominent white nationalist described Russia as “the leader of the free world right now,” because Putin is “promoting traditional values.” This attraction translates into co-option through soft power, allowing illiberal western groups to serve as instruments of the Russian state. Writing in the Atlantic, Michael Carpenter details how Russian intelligence services have used these shared values to co-opt far-right groups, turning them into a front for the Russian government.

The final stage of the color revolution weapon is to use the cultivated front to generate controlled chaos which creates opportunities to overthrow a targeted government. This is exactly what Moscow did in its failed coup in Montenegro. In 2016, immediately after Montenegro joined NATO, Russian security forces attempted to overthrow the government and replace it with the Democratic Front (DF), a group of pro-Russian ethno-nationalist parties. According to Foreign Policy Research Institute, the plan for the coup was for an ethno-nationalist Serb militia group—previously co-opted by Russian intelligence—to use violence to generate mass protests, thereby creating an opportunity to overturn the election results and install a pro-Russian illiberal regime.

The attempt to build its own color revolution weapon demonstrates how the Russian government seeks to spread its influence using ideology and value promotion as core components of its foreign policy. Critics of the argument that Putin has centered far-right ideologies will point out that the Russian government has also cultivated left-wing groups. While this is true, the cultivation of left-wing groups is often used in support of far-right goals. More importantly, there is no left-wing ideology comparable to “traditional values” listed in Russia’s strategic doctrines.

Far from being non-ideological, the key to understanding Russian grand strategy is recognizing that the Kremlin believes values-based ideologies are the source of the most powerful weapons in the current security environment. The weaponization of values means that they are subjected to the rules of the security dilemma—the zero-sum game where the increased strength of one state makes another state feel less secure. Today, Putin sees the ideological-informational domain as characterized by a zero-sum struggle between liberalism and illiberalism. In this ideological competition, the thugs undermining democracy and shutting down the Georgian Pride parade are part of the same challenge as pro-Russian white nationalist militia groups storming the American capital on January 6th to overturn election results. Until democratic policymakers recognize Moscow’s inherently ideological approach to foreign policy, they will be continually betrayed by their own misplaced expectations for cooperation.

Ben Sohl is a recent graduate of the Fletcher School of Law and Diplomacy. You can find him on Twitter @ben_sohl.