Moscow Claims Debris From Soviet Satellite Not a Problem 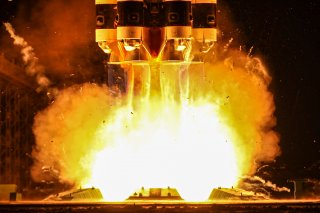 Space may be the final frontier, but immediate space around the Earth is full of space debris. This problem became far worse after Russia conducted an anti-satellite weapon test that left a cloud of debris in orbit that could threaten vital satellites and even the International Space Station (ISS).

In fact, on November 15, astronauts on the ISS were warned to seek shelter in their docked spacecraft in case of a catastrophic collision as the station passed through the freshly created cloud of debris created after Russia destroyed a Soviet-era satellite during its test. A day later, on November 16, the U.S. 18th Space Control Squadron confirmed the breakup of the COSMOS-1408 satellite and estimated that there could be upwards of fifteen hundred new pieces of debris floating through space as a result of the incident.

More than three weeks after conducting the anti-missile test, Chief of the Russian General Staff Valery Gerasimov said that there was little reason for concern, and suggested that the debris should pose no threat to operational space vehicles, TASS reported.

“The fragments that emerged pose no threat to space activity in orbit. Currently, the fragments are moving along the trajectories outside the orbits of space stations, are under control and have been entered into the main catalog of the Russian space control system,” Gerasimov said at a briefing for foreign military diplomats on Thursday.

The chief of the Russian General Staff added that on November 15, Russia conducted a “successful tests were held to strike a defunct domestic satellite launched back in 1982.”

There has been man-made debris scattered around the world since antiquity—but in most cases, it hasn’t been a problem until the introduction of plastic, which has the potential to last for eons. By contrast, space debris is actually a relatively new concern. Plastic in the oceans and landfills is a concern given that it could be a toxin that enters the food chain, whereas space debris could be both a long-term and short-term threat. The debris could interfere with satellites and impact future space missions, and yet there seems to be no way of actually removing a lot of it.

The first debris only arrived in orbit in 1957 with the launch of Sputnik-1. Since that time there have been more than five thousand launches, and that has generated 23,200 cataloged objects larger than 10 centimeters across. That represents about 99 percent of the total mass in orbit—some 8,000 tonnes.

Earth’s orbit has become akin to a cosmic junkyard. In addition to operational satellites, there are also end-of-life/non-function satellites, abandoned launch vehicle stages and various fragments of all sizes.

Russia’s recent test is just the most recent event to scatter debris so widely. In 2007, China had deliberately destroyed one of its own satellites in an anti-missile test, which resulted in some 3,527 pieces of identified debris. In 2009, the American satellite Iridium 33 and the Russian satellite Cosmos 2251 collided in orbit, doubling the amount of debris over 10 cm in orbit.

While efforts to remove the debris are considered, it is likely that the space junk could get so great that some experts warn that Earth could soon have an artificial ring made of all the debris.