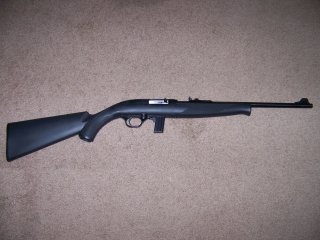 Sometimes, the market for .22 rifles can seem overwhelming, especially to someone who’s searching for their first. Look no further than the Mossberg 702 Plinkster; first produced in 2003, the Plinkster is a reliable rifle that’s cheap but effective. It works perfect for a first timer’s gun and even an old timer’s too. Read on to find out if the Plinkster is the right pick for you.

You’ll get bang for your buck here; at 100 yards I’ve consistently got one and a half inch groupings on the range. It comes equipped with front and rear fiber-optic iron sights, the rear of which even allows for adjusting for height. You can even fold the sights down to make room for a low scope ring. Getting a scope—like the Strike Eagle—for it sure couldn’t hurt, either.

The barrel is long at 18” and is free-floating, which means that the stock and the barrel do not touch, the barrel instead being attached to the receiver. What this means for you is that there are less vibrations in the barrel, which tightens your groupings considerably. The Plinkster works for shooting rodents or even just showing off on the range. If this piques your interest in free-floating barrels, check out SigSauer’s M400 TREAD for one with more punch.

I’ve owned this rifle for many years and I can count the amount of malfunctions I’ve had on one hand. For something that shoots .22LR which is one of the dirtiest, least reliable rounds available, the Plinkster holds its own and is pretty easy to clean too, once you get through the lengthy disassembly. Still, you’ll be pleasantly surprised by how well the gun holds up after so long.

This is a lightweight gun at only four pounds, so it can feel pretty strange to use if you’re a taller, stronger person. This is why I think the Plinkster works well for someone’s first gun, especially if they’re a kid or a teenager. Of course, since it’s a .22, recoil is no problem at all. Now, it’s no self-defense rifle, so if you want a lightweight form of that, look here.

The Plinkster’s trigger is crisp; it feels great to shoot. The trigger weight sits at 5.75 pounds and you can even get a trigger job done on it to lighten it further. It works amazingly and it feels satisfying to pull.

Coming in 10 or 25-round box magazines, and both feed about as expected. The 25-rounder can seem like a chore to load bullets into, but you just need to apply a little extra pressure compared to the standard 10-round. The Plinkster comes with a loading tool which helps a lot with this.

Weighing in at four pounds, the Plinkster can be held for a long period by just about anybody. The barrel length is 18” which helps with the accuracy, and in total the gun is 37” long, which makes it bigger than the LWRC IC-SPR, an AR-15 rifle.

As this is a .22 rifle, there’s not much to say about recoil. The weight, the long, free-floating barrel, and the trigger all help to even further decrease the recoil. Sometimes, you might not even feel the Plinkster recoil after firing. This works perfect for small game, but for something bigger you might want to try a rifle chambered in .300.

As far as price goes, the Plinkster is a healthy pick for your wallet. The MSRP is $139 and prices range down to around $100, sometimes even cheaper. I’d say the affordability is close to the AR-556, as far as bang for your buck goes.

If you’re looking for a starter .22 rifle or even just a good plinker or varmint shooter, you really can’t go wrong with the 702 Plinkster. It’s accurate beyond expectations, it’s lightweight, very reliable, and feels great to take out and shoot. The only con I can see with it is that it’s not very customizable, which its cousin the Ruger 10/22 beats it at. Still, given the price and the quality of the rifle, you’d be hard pressed to find something with more worth.