"The Most Complete Naval Victory": How America Smashed Japan at Midway 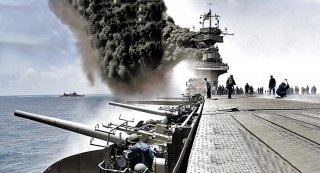 Founding German chancellor Otto von Bismarck was not a funny guy. As a rule, in fact, Bismarck was downright grim. He glowers at us from eternity. Once in awhile, though, the Iron Chancellor came out with a jest worthy of the great Yogi Berra—as when he reputedly proclaimed that Providence smiles on “fools, drunkards, and the United States of America.” Foolish besotted ‘Mercans must be triply blessed.

Yet Providence seldom does it all. It furnishes opportunity perchance. Individuals must grab and exploit opportunities fortune’s favor deigns to bestow on them.

Never was this truer than June 1942, when U.S. Navy and Imperial Japanese Navy (IJN) aircraft-carrier task forces met in battle off Midway Island, an atoll northwest of Hawaii. Hollywood essays a rare look at naval history this weekend with the release of director Roland Emmerich’s Midway, the first cinematic account of this epic clash since the 1970s. Not having seen the film yet, I can neither praise its wholesome goodness nor damn its failings.

There remains plenty to say about the encounter, regardless of how well Hollywood did its work. Fortune granted the USA its favor at Midway, as Bismarck might have prophesied. But it was sound doctrine and strategy, entrepreneurship among naval aviators, and shrewd senior leadership that positioned the U.S. Pacific Fleet to harvest the opportunities placed before it. And harvest them the navy did. By the time the guns, bombs, and torpedoes fell silent the Kidō Butai­­—the carrier striking fleet that had pounded Pearl Harbor six months before—adorned the Pacific seafloor.

Historian Craig Symonds pronounces Midway “the most complete naval victory” since 1805, when Lord Horatio Nelson’s Royal Navy swept the combined French and Spanish fleets from the briny main at Trafalgar. Was it a “decisive” victory as well as complete? Opinions vary. How to define that word commonly provokes one of those scholarly debates that’s so envenomed because the stakes are so small. Some scholars of martial affairs insist that a decisive battle must lead directly to peace in fairly short order. It must decide the outcome of the war as a whole in order to qualify.

That’s a mighty constricted definition. To its purveyors we might say, with Coach Lee Corso—this being college football season—not so fast, my friend! And hazard a contrary view, as Corso does when picking winners and losers on game day.

The classics of strategy divulge no concrete definition. Carl von Clausewitz comes closest in On War, stating vaguely that a great battle constitutes “a decisive factor in the outcome of a war or campaign” (my italics). Midway didn’t decide the outcome of World War II in the narrow sense. It did decide whether the IJN could annihilate the U.S. Pacific Fleet before it could rebuild, and it did decide the fate of Japan’s effort to rig a “ribbon defense,” or defensive rampart, stretching from northerly island strongholds in the Aleutians through Midway at the ribbon’s midpoint through fastnesses farther south.

And it did decide whether Tokyo would accomplish the goals for which it went to war. Answer on all counts: no. Midway reversed the flow of war in the Pacific from east to west, and operations kept flowing westerly until ultimate Allied victory in 1945. Sounds decisive to me—much as Trafalgar decided who would rule the sea during the Napoleonic Wars. Nelson’s clean sweep may not have led directly or speedily to peace, but it was a crucial enabler. It was a factor indispensable to the eventual outcome, even though the little emperor didn’t meet his Waterloo for another decade.

And opportunism—in particular the opportunism of Rear Admiral Raymond J. Spruance, the commander of Task Force 16, built around the flattops USS Enterprise and Hornet—helped the U.S. Navy reap the fruits of decisive battle. According to Samuel Eliot Morison, the dean of World War II naval historians, Spruance displayed “the very highest quality of tactical wisdom, the power to seize opportunities.” And although Spruance was a surface-ship officer in charge of naval aviation assets, he had the spine to overrule professional aviators when circumstances warranted.

Pacific Fleet boss Admiral Chester Nimitz afforded Spruance and Rear Admiral Frank Jack Fletcher—who headed up Task Force 17, centered on the carrier Yorktown, and was assigned overall tactical command—ample leeway to shape their high-seas fate. Nimitz instructed them to conduct themselves by “the principle of calculated risk” at Midway. By that he meant avoiding “exposure of your force to attack by superior enemy forces without good prospect of inflicting . . . greater damage on the enemy.”

His directive made strategic sense. Both combatants had committed all of their deployable fleet carriers to action at Midway. The IJN enjoyed a 4-3 numerical edge, yet it was Nimitz who had the luxury of risking his carriers. They were replaceable where Japan’s were not. Nimitz presided over a remnant of the prewar Pacific Fleet. He knew that a bigger, better U.S. Navy—including a brand-new class of fleet carriers, the Essex class—was building in shipyards back home and would make its way to the Pacific Ocean starting in 1943. With only a fraction of American industrial capacity, Japan could scarcely regenerate naval strength depleted in action. America could redeem its losses and then some; Japan would struggle to sustain itself.

If you have a spare weapon in the armory—or soon will—you may as well risk the one you have.

Admiral Spruance wielded Task Force 16 to good effect. Around daybreak on June 4 a Midway-based patrol plane reported sighting two IJN carriers steaming southeast toward the island. The American fleet had taken station to Midway’s northeast in hopes of mounting an ambush from an unexpected quarter, so Admiral Fletcher ordered Spruance to take Enterprise, Hornet, and their cohort southwest to intercept the foe. Spruance and his chief of staff, Captain Miles Browning, rightly surmised that Admiral Chūichi Nagumo, the Kidō Butai­­ commander, meant to bombard Midway and its U.S. Marine garrison.

They also suspected that Nagumo assumed no U.S. carriers would be in the vicinity. After all, a diversionary force had staged attacks in the Aleutian Islands, and top IJN commanders believed Nimitz would have dispatched the Pacific Fleet to intervene. Nagumo, then, was conflicted when scout planes reported the presence of U.S. carriers: should he rearm the Kidō Butai­­’s warplanes with torpedoes to assail enemy shipping, or keep loading them with bombs to execute subsequent raids against Midway?

Spruance and Browning timed their launches to coincide with times of maximum flux in the Japanese fleet’s recovery and launch cycle—and to exploit Nagumo’s indecision. Carrier crews trying to refuel and arm warplanes are busy with other duties than self-defense. They’re also handling explosives and flammable liquids in parts of the ship vulnerable to bomb blasts.

For all that, the American air attacks were no masterpiece of massing firepower at the decisive place and time for mass impact. In mid-morning Hornet and Enterprise torpedo-bombers went in low, and broke themselves against the curtain of IJN anti-aircraft fire as well as Zeke fighters swooping overhead. While Japanese defenders concentrated their energies down low, Enterprise and then Yorktown dive-bombers arrived overhead. They pounced on the enemy flattops from high altitude, setting three of four ablaze within six minutes. Hiryu, the lone undamaged carrier, struck back successfully at Yorktown—only to be dispatched itself late that afternoon.

The Imperial Japanese Navy thus lost four of the Kidō Butai­­’s four fleet carriers in a day (two others damaged previously remained at home under repair and would return to action later in the war), to one of three for the U.S. Navy. Providence favored the U.S. Navy, and the leadership put its gift to good use.

Tempering his respect for technical specialists, in particular career airmen, comprised part of Ray Spruance’s entrepreneurship. For a time on the morning of June 4 he deferred to the wishes of Captain Browning, only to overrule him when the threat of Japanese air attacks loomed. Doctrine in those days called on air groups to stage a “deferred departure” from the carrier. All squadrons would launch, gather overhead, and then proceed on their route en masse. In the process the first aircraft to launch would orbit overhead—and waste precious fuel while the rest of the group assembled.

The Hornet air wing conducted a deferred departure on the morning of June 4 at Browning’s direction. When the staff radio intelligence officer reported intercepting a Japanese scout plane’s transmission reporting the task force’s whereabouts, however, Spruance decided that, as Craig Symonds puts it, “enough was enough.” He had the flagship signal to Enterprise dive-bomber squadrons circling overhead: “proceed on mission assigned.” In other words, do not dawdle. Get aloft and proceed along your way. Spruance overrode procedures. That’s why the air wings attacked in fragmentary fashion—a drawback in combat—but it helped the bomber squadrons conserve fuel they would need to search out and attack the Japanese flattops. “It was the right decision,” affirms Symonds, even though it cost the Americans in terms of coordinated action.