Most U.S. Households Don't Own a 4K HDTV. Do You Really Need an 8K HDTV? 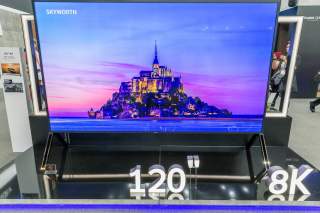 4K a is fairly young consumer television standard, one that has yet to penetrate even half of U.S. households. But if you’ve been keeping up with trends in the TV market, you may have heard that 8K is the wave of the future; the next big leap in television technology, on par with the transition from Full HD to 4K or the advent of Widescreen.

With 8K technology still very much in its infancy, should you become an early adopter?

First, some basics. One of the most common TV hardware specifications, display resolution is the number of pixels you see on your display. 8K refers to a display resolution of 7680 × 4320 pixels. For a sense of perspective, 1080p and 4K displays have resolutions of 1,920 by 1,080 and 3,840 by 2,160 pixels respectively. This means that a 8K displays show 16 times the pixels of their 1080p counterparts, and 4 times that of 4K displays.

What do all these numbers mean for you as a consumer? Everything else being equal, an 8K display should be significantly sharper than anything currently on the market-- the difference will be particularly dramatic if you’re coming from an older 1080p television, but testing confirms a noticeable, though smaller, jump in image quality between 4K and 8K. 8K scales particularly well in setups that combine moderate to close viewing distances with large displays, where 4K can start to look washed out.

There is a crucial caveat: as important as it is, the resolution is only one of several factors that determine display quality-- HDR output, contrast ratio, and display panel type all are key features to consider when buying a television. Also, don’t expect any native 8K content any time soon;  there are only a handful of YouTube videos and other experimental content that support it, and it can potentially take up to a decade for 8K to become as widely supported as 4K is today.

The good news, however, is that 8K televisions use “upscaling” techniques to display lower resolution content with a much higher degree of visual quality-- when unveiling its 2019 Q900R 8K TV, Samsung even boasted that their “Smart Upscaling” technology is so advanced that it can add details to 4K content that weren’t there in the first place. Upscaling will remain the dominant form of 8K content consumption for years to come, and that’s not necessarily a bad thing.

There is little question that 8K televisions offer a superior viewing experience, but should you buy one? This is where things get complicated. In 2020, 8K’s biggest selling point is future-proofing. Consider that the average household is on a 4-5 year TV upgrade cycle; if you are currently in the market for a high-end television, it makes sense to buy into the 8K platform to prepare yourself for the proliferation of 8K content through the mid 2020’s.

Know this: You will be paying an early adopter’s fee, though not as much as you’d think. Samsung’s excellent, aggressively priced Q900 series starts at a surprisingly reasonable $2,499-- not that much more than today’s top-end 4K TV’s, and a much better long-term investment than the latter. The problem isn’t so much the cost, but that future-proofing can be a double-edged sword: with 8K technology nowhere near maturity, it’s impossible to predict what game-changing features may be added to new 8K TV’s in the coming years. That’s the inherent risk of being an early adopter, but one that may very well be worth it for TV enthusiasts seeking best-in-class image quality.