Move Over, Coronavirus: We Fought A Pandemic During the Vietnam War 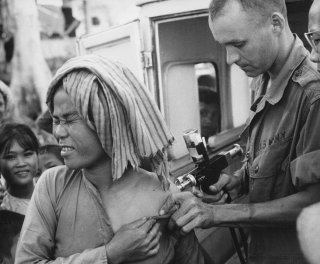 2020 has been a rough year.  1968 was worse.  Granted, as of late April, we are only a third of the way into this tumultuous and frustrating new decade.  Unless the United States goes to war, loses important and mostly celebrated political and social leaders to assassination, and unless multiple riots and ensuring police brutality erupt at the Democratic Convention in Milwaukee, 1968 may remain one of the low points in America’s history since the end of World War II.

Need more evidence?  Many may recall that after Robert Kennedy and Martin Luther King’s assassinations, race riots devasted numerous communities in Los Angeles, Washington D.C., Detroit, and elsewhere.  Meanwhile, in Vietnam, the Tet Offensive proved that there was no light at the end of the tunnel and that the war was getting worse in terms of human cost, with 16,899 troops killed in action in 1968 alone.  Additionally, tens of thousands of more troops deployed to Southeast Asia than in 1967.  Peak troop strength was over 540,000 by the end of April in 1968.

On top of war abroad and extensive civil unrest at home, yet another big problem made life harder.  In 1968, the H3N2 pandemic killed more individuals in the U.S. than the combined total number of American fatalities during both the Vietnam and Korean Wars. In almost all historical accounts of 1968, war and politics dominate.  The H3N2 virus, in contrast, is literally nowhere to be found, especially in books focused on the Vietnam War.  Globally, the 1968 Pandemic (created by H3N2)  killed over a million individuals, and in the United States, with a 1968 total population of 205 million, the virus killed over 100,000 individuals. After studying the Vietnam War for almost fifteen years, it is surprising that the 1968 Pandemic is not even mentioned.  In an attempt to avoid calling the kettle black, it took COVID 19 for this realization and a question to emerge.

Considering the way COVID 19 has changed the course of 2020, one is left to wonder: why does the 1968 pandemic barely make an appearance in studies where American foreign policy has been scrutinized at length.  If domestic politics played any role in America’s war in Vietnam, why isn’t the 1968 Pandemic somewhere in the analytical mix?  Simply put, why has this topic elided historians focusing on the Vietnam War?  Unfortunately, war may have something to do with it.  Despite calls for unity in the face of such "seismic" calamity as COVID 19, the disease does not unite Americans any more than war unites it.  With the possible exception of World War II and from the American Revolution to today, war has rarely pulled the United States together.  Much as the Vietnam War divided Americans, the response to COVID 19 appears to be doing the same.

It is helpful to understand the magnitude of the 1968 H3N2 Pandemic.  How prevalent was it?  Does it share characteristics with Coronavirus?  For starters, the 1968 virus was not simply the flu.  By definition, pandemics “result from the emergence of an influenza A virus that is novel for the human population.”  According to the Journal of Infectious Diseases, the A/H3N2 virus emerged out of Hong Kong in July 1968 and replaced an earlier virus, A/H2N2, in circulation during the 1957 Pandemic.  The difference in coding between H2N2 and H3N2 stems from the different antigenic subtype in hemagglutinin (the H), which explains the different numeral for the HA antigen. This "H" component is what made it 'novel' for the population, whereas the "N2" (representing ‘neuraminidase”) was present in both 1957 and 1968 pandemics.  With the exception of those who were old enough to have lived through the 1918 Pandemic, the public in 1957 “was confronted by a virus with which it had had no experience, and it was shown that the virus alone, without bacterial co-invaders, was lethal.”  Those who endured the 1957 Pandemic possibly gained a degree of immunity against later strains, except for new mutations.  As a Center for Disease Control report from 2006 states: “true pandemics with changes in hemagglutinin subtypes arise from genetic reassortment with animal influence A viruses.”  It is this “reassortment” that contributes to making a virus novel in the most unflattering sense.

In 1968, the virus spread rapidly from Hong Kong to the United States and then to Europe because of increased air travel across continents.  In a manner similar to SARS, Ebola, Avian Flu, H1-N1, and H3N2 in 1968, the surge of COVID 19 is only the most recent “cost of globalization” that has already been with us for decades.  The first wave of the 1968 virus hit the United States especially hard, while asymptomatic infections and much lower mortality rates occurred in England, France, and other countries.  Through a phenomenon vividly termed "smoldering," a second wave in 1969/1970, increased infection and mortality rates in England and France than those these countries experience during the 1968 wave of H3N2.  In the United States, the “2nd” wave of smoldering in 1969/1970 was far less than what the British and French endured.  To satisfy potential cynics, the Journal of Infectious Disease’s 2005 report explains that H3N2 was not simply the “flu” but truly “a novel virus subtype.”  Further, there was a two-week delay between morbidity (contracting the virus) and mortality.  This closely parallels similar patterns for COVID 19.

Current reporting indicates that more Americans may die from COVID 19 than died in both the Vietnam and Korean Wars.  Let us hope that this turns out to be inaccurate.  Yet, in histories assessing the Vietnam War, the 1968 Pandemic inflicted far more damage in terms of human life than COVID 19, at least as of late April 2020.  In terms of histories touching on the 1968 Pandemic, after reviewing at least a dozen of the most prominent histories of the Vietnam War, ranging from George Herring’s The Longest War to A.J. Langguth’s Our Vietnam, not one book includes Flu, Influenza, H3N2, or even Pandemic in its index.  Granted, the numbers of COVID 19 deaths, which are not precisely known, far exceed those currently reported, and the economic costs appear to become increasingly central to the 2020 Pandemic.  Still, it is remarkable that the 1968 Pandemic does not even surface in well-respected studies of the Vietnam War.  Was the 1968 Pandemic of such little concern, when compared to other events, that it did really figure into American domestic politics, let alone those involving American foreign policy?  Considering the complete dominance of COVID 19 in the news today, as contrasted by the 1968 Pandemic, why is 2020 so different?

It is possible that the key difference between the 1968 Pandemic and COVID 19 in 2020 is the ongoing economic devastation occurring within a majority of countries.  The economic downturn, and lasting consequences for small businesses and the service industry as an entire bloc, are certainly more severe than most financial turmoil in the 1960s. Numerous reports point to the fact that it will take years for the United States to recover and that day-to-day business will not be the same as before, at least in major cities such as New York City.  It is also expected that COVID-19 will change National Security and how the United States assesses its readiness for potential defense and security-related crises, let alone public health readiness.  It is difficult to substantiate claims that the world was not deeply interconnected in 1968.  So, is the need to shut down a majority of the global economy a reflection of greater aversion to personal risk?

The fact that almost fifty years elapsed between the 1918 and 1968 Pandemics, and a little over fifty years have elapsed since 1968 suggests that a major virus may have the potential predictability of Hailey’s comet.  In any case, it would certainly be interesting to know in what ways the 1968 Pandemic affected or did not affect policy decisions concerning the Vietnam War.  And if it didn’t, why not?  Reflecting on Pandemics more thoroughly in our histories might certainly help us realize that they should not be the Black Swans that they seem.

There are some who believe that the "COVID crisis" will change us.  I hope they are right.  Yet, if the 1968 pandemic was so invisible that it barely makes it into key books on the Vietnam War, it is hard to see how change will come about after COVID 19 eventually retreats.  In much the same way that the Iraq War demonstrated our ability to forget lessons from the Vietnam War, the 1968 Pandemic suggests we may eventually forget COVID 19 in a similar way.  Not only does the general public forget.  Unfortunately, historians too, often forget history.

Nathaniel L. Moir, Ph.D. is an Ernest May Postdoctoral Fellow in History and Policy and a member of the Applied History Project at the Belfer Center for Science and International Affairs at Harvard University’s Kennedy School of Government.