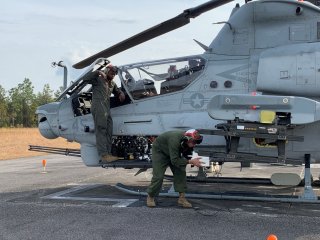 The Marine Corps is firing the new Joint Air Ground Missile (JAGM) tank-killing replacement for the Hellfire missile from its AH-1Z Viper helicopter.

In a recent test firing at Eglin Air Force Base, the Corps fired off a JAGM from its signature attack helicopter to assess the ability of the weapon to attack coastal targets and emerging enemies in littoral waters. Establishing and advancing “sea control” is the aim of the assessments as the Corps looks to increase lethality against maritime, coastal, and land-based enemy targets.

Built to improve upon the combat-tested technology of the Hellfire Missile, JAGM is equipped with two sensor technologies to optimize missile performance on maritime targets. The intent of the test, according to a Corps press statement, was to refine attack tactics, techniques, and procedures to employ the new weapon in a range of anticipated future combat scenarios.

Tank-killing kinds of firepower, able to track and destroy maritime targets on the move, brings a substantial lethality dimension to amphibious warfare. The helicopter could of course support an amphibious assault by attacking enemy small boats, larger surface ships, and even submarines when they surface to communicate. A JAGM-armed attack helicopter such as the AH-1Z Viper could also help stop an enemy amphibious operation by destroying armored vehicles in transit, attacking landing craft, and even firing directly upon surface ships. While the exact range of JAGM is not known, a Hellfire missile operates within roughly an eight-kilometer range.

How will the JAGM advance HELLFIRE technology? The Army has greatly upgraded a number of Hellfire missile enhancements such as blast-frag warheads, anti-tank weapons, and additional metal sleeves to maximize fragmentation for an anti-personnel effect. Perhaps a JAGM will attack a deck crew of an enemy ship and wish to impact or degrade an enemy's operational capability by disabling advanced maritime sensors, drones, and land-based command and control structures.

The Corps is now analyzing collected data and results from the test with a mind to better developing an idea for how best to prepare the force for a new generation of air-sea-land threats. Lethality will need to not only need to extend over long ranges but also integrate precision with an ability to destroy maritime targets on the move. If operating from the flight deck of a U.S. destroyer, a JAGM-armed Viper attack helicopter can greatly expand its attack options and hold what the Corps statement described as “expeditionary advanced base operations.”