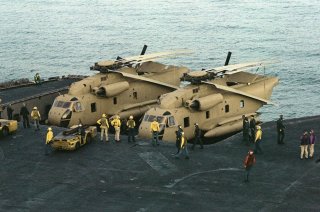 There’s a new documentary about Jimmy Carter, called “Jimmy Carter: Rock ‘n’ Roll President,” that showed at film festivals throughout the last year and will air on CNN this fall. The film took a wistful look at the 39th president’s unlikely friendship with rock and country artists, such as Bob Dylan and Willie Nelson.

Another new documentary, “Desert One,” takes a look back at the Carter years that isn’t nearly as jovial: Carter’s botched rescue mission during the April 1980 Iran hostage crisis. The equipment didn’t work, the mission was aborted, and a helicopter crash afterward killed eight servicemen. The Operation Eagle Claw debacle, and the larger failure to rescue the hostages, is widely believed to have crushed any hopes of a Carter re-election.

The “Desert One” documentary, directed by veteran documentarian Barbara Kopple, looks back on the failed mission, featuring interviews with just everyone. In fact, she interviews President Carter himself—who certainly sits for more documentary interviews than any other nonagenarian alive. She also talks to his vice president, Walter Mondale, many of the mission planners, the hostages in Iran, and even some of the hostage takers. There’s also plenty of news and archival footage, including preserved recordings of the decision-making at the time.

What’s particularly striking is how much many of these people are haunted by their failure, and guilty over their actions that not only failed in the mission but resulted in the deaths of servicemen. Carter, for his part, calls the deaths the worst most of his presidency, and possibly also of his life. It’s the sort of self-reflection, self-awareness and empathy not often seen from the current commander-in-chief.

After all, as horrible and humiliating as the Iranian hostage crisis was for the United States, the hostages all made it home alive. That wasn’t the case for eight of the men sent to rescue them. The heroic rescue mission narrative would have to be saved for the 2012 film “Argo,” which chronicled the rescue of six Americans who had escaped the embassy and were hidden in the home of the Canadian ambassador. That film won the Best Picture Oscar that year and while undoubtedly exciting, has been criticized both for fictionalizing the dramatic climax, and for giving the CIA credit for actions taken by Canada’s government.

“Desert One” opens Friday at more than 100 Virtual Cinemas as well as some actual theaters; see its availability here. It would make a fine double feature with “Coup 53,” another documentary about Iran that also arrived this week. It covers events in the 1950s that undoubtedly led to the events of “Desert One.”