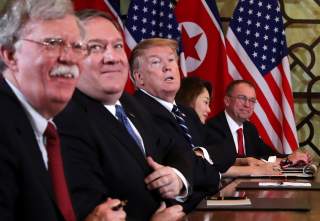 Trump spoke to reporters Wednesday about why Bolton left the administration and noted that the former National Secretary adviser made “big mistakes.” Trump first tweeted that he had fired Bolton Tuesday, but Bolton hit back at the president shortly after and said he offered to resign.

“Donald Trump, an American president, actually fired his National Security adviser – or forced him out – because the dictator of North Korea didn’t like him,” Scarborough suggested on MSNBC’s “Morning Joe.”

Scarborough’s comments were directed at one of the reasons Trump said he had a problem with Bolton. In April 2018, Bolton suggested applying the “Libyan model” to North Korea regarding denuclearization, Mediatite reported. After North Korea hit back at Bolton’s comments, Trump followed. He told reporters Wednesday that this 2018 discussion “set [them] back very badly.”

“Willie, as you know, the Libyan model actually diplomatically was seen as a great success,” Scarborough added. “And the president would just have to be completely ignorant of history and have ignored the news for the past 15 years, which I’m sure he did, to not understand that they were talking about how the United States worked to disarm Libya’s WMD weapons.”

“Bolton wasn’t sufficiently pro Taliban enough … This is a guy, Willie, this is a guy who continues and we’ve said it for some time, but he keeps doing it. Embracing our enemies and insulting our allies. And I don’t think John Bolton was ever going fit neatly into that sort of ideological construct.”