Mubarak May Be Dead, But Egypt Is Not Better Off 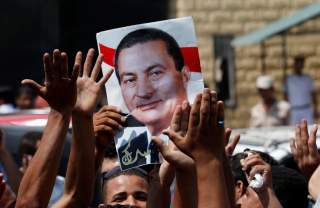 Former Egyptian President Hosni Mubarak died today in Cairo, aged 91. He became president of Egypt in the wake of the assassination of Anwar Sadat, and was ousted in 2011 during the Arab Spring. Imprisoned for crimes committed while in office, he was freed in 2017.

Mubarak kept somewhat faithfully to the Camp David Accords Sadat had signed, and presided over an uneasy and cold peace with Israel during his time in office. For that, he enjoyed about two billion per annum in US foreign and military assistance. And while he permitted — under intense pressure from the United States and international financial institutions — some economic reform that delivered some improvement in the lives of average Egyptians, Mubarak also amassed vast wealth for himself, solidified a kleptocracy that enriched his family, his cronies and favored military friends, and watched as Egypt slid from the pinnacle of Arab power to a mere bystander in the affairs of the region.

But for the United States, Mubarak’s conduct at home was irrelevant. His crackdowns on political opposition were minor annoyances. His suppression of all political parties, a free press, unregulated business, NGOs and every other trapping of a free society were almost matters of indifference to successive American presidents of both parties. Rampant poverty and the growing radicalization of Egypt’s Muslim Brotherhood were afterthoughts even for the US Congress, normally engaged on such matters. Even as trouble brewed on the horizon, the Bush and the Obama administrations looked on with apathy, comfortable with the idea that Mubarak, the new pharaoh, would anoint his son as the next president of Egypt.

Unfortunately, the Egyptian people who had suffered under his iron rule for so long could not remain indifferent. But as they gathered in Tahrir Square in Cairo in 2011 to protest and call for new leadership, one thing quickly became clear: Moderates, liberals, and other non-Islamist groups were ill-trained, ill-equipped and under-resourced when it came to challenging the powers that be. They could start a revolution, but only the Brotherhood was able to reap its rewards. The world’s democracies had all but ignored those liberals over the years, allowing them to rot in prison, or live in constant fear of arrest or worse. Sure, there were some efforts, but most were paltry and could hardly stand against Mubarak’s iron hand. The efforts of groups like the International Republican Institute and the National Democratic Institute were not backed by the State Department nor White House, and when push came to shove, it was Camp David over all. The freedom of the Egyptian people be damned.

So it should come as no surprise that the current head of al Qaeda hails from Egypt, a former denizen of Egyptian prisons. Nor should it come as any surprise that once ruled by the anti-democratic extremists of the Brotherhood, the Egyptian military again flexed its muscles to regain power and cash. The current leader, General Abdel Fattah al Sisi is Mubarak redux, but worse. Thousands are in prison; the military and Sisi are getting rich. And the Egyptian people? They are the victims. Will there be another revolution? Of course. Will it matter to the United States? Possibly not. Then again, we have found that ignoring the problems of the region comes back to bite us at home.

It would be nice, as one generation of Arab autocrats passes from the scene, if the United States and its European allies would adjust policies to try to prioritize governance and human rights in the Arab world. Selfishly, that might ensure an end to mass refugee flows, mass murder and terrorist extremism. Otherwise, it will just be one Mubarak after another, or worse.

This article by Danielle Pletka first appeared at the American Enterprise Institute.